A student-led cruise is off central California right now, seeking records of the ancient California Current in the Santa Barbara basin’s famously layered mud. The CalEchoes cruise is a great blend of cool science and education outreach. (The cruise is out of my academic home, Scripps Institution of Oceanography, but I’m not involved with it.)

For the science part, check out the time records captured by one of the CalEchoes mud cores. This mud was captured by a Kasten core, which is basically a metal box with several hundred pounds of weight that gets rammed into the muddy seafloor, then gently pulled out. The CalEchoes scientists will use the microscopic fossils and DNA captured in this mud to reconstruct California climate and ecosystems back to the year 340 CE.

Ancient layers of mud from the Santa Barbara basin

The CalEchoes scientists are also working extensively with schools, and have brought 7 educators to sea with them. Anyone know if that is a record? The most adorable part of the education mission right now has got to be these drawings depicting “Life On A Research Vessel” from Roehm Middle School. 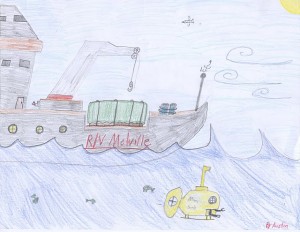 You can follow along with CalEchoes on their blog and on Twitter. They’ve also got a ton of photos up at their Picasa album, and their very first video on YouTube. They’ll also be posting educational materials developed by the onboard educators on their website. If you are a student, have students, or are just curious, you can ask them questions on their blog. They’re only at sea until this Sunday October 3, so ask now!