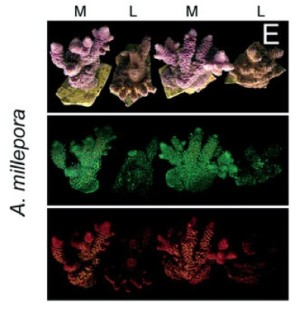 A post on NOAA’s Coral-List (an automatic mailing list forum for online discussions and announcements pertaining to coral reef ecosystem research, conservation, and education) caught my eye as it featured an interesting field observation that was made following a recent series of severe coral bleaching events in the Coral Triangle:

“An acquaintance has passed on a report from a dive resort owner in Malaysia who observed that prior to each bleaching event all corals underwent a spectacular color change, displaying bright neon colors…  Does anyone have further insights or own observations on this?”

Reef building stony corals bleach when colonies of coral polyps lose the single-celled algae (zooxanthellae) that live within their tissues. These golden-brown colored algae occur in varying densities in reef corals (and other reef invertebrates) and give them a light tan to deep chocolate brown color.  Where additional pigments exist within the animal cells, this golden-brown color can either remain the dominant coloration or it can be overlaid by different hues, such as blue, green, purple or yellow.

When corals lose their zooxanthellae, the white calcium carbonate skeleton can be seen through the transparent animal tissue, making the corals look bleached white (see left). But in some cases where the corals possess additional animal pigments, bleached corals can take on vivid ﬂuorescent hues, with no trace of the normal golden-brown background color.

It might help to think of coral accessory pigments as similar to the secondary pigments in Sugar Maple leaves.  During growth seasons, the primary photosynthetic pigment observable in maple leaves are the greens from chlorophylls.  But as daylight hours shorten and nighttime temperatures cool, the chlorophyll is transported out of the leaves, exposing the vivid reds and yellows of accessory pigments such as carotenes and xanthophylls that were there all the time.  The comparative difference is that coral accessory pigments are produced through the animal metabolism of the coral polyp rather than through the zooxanthellae algal symbiont metabolism.

Coral bleaching is a stress response, though not all bleaching is caused by climate change.  Ecological factors like exposure to air during low tides or disease can also trigger bleaching.  And bleaching is not necessarily a death sentence.  While corals cannot remain bleached indefinitely, if the stress is not too severe or prolonged, they can slowly regain or regrow their zooxanthellae and survive.  But in severe bleaching events many corals subsequently die, causing major changes in the structure and function of a reef ecosystem, with a possible cascading impact on other organisms.

What the Malaysian observer had noticed in the Coral-List post was that stressed corals can put on a dazzling neon display of underlying accessory pigments just prior to bleaching.  The casual observer might have no clue that this technicolor display is actually a stress condition.  In fact, it’s been my own experience that recreational divers often perceive the typical healthy golden-brown or tan color of stony corals as being “unhealthy!”

So, is vivid coloration of some reef-building corals an early warning sign of an imminent bleaching event right around the corner?

The answer seems to be maybe.

In a controlled aquarium study conducted by D’Angelo et. al., several reef coral species were found to concentrate both fluorescent and non-fluorescent proteins (proteins responsible for the neon colors) when exposed to an increase in light intensity and elevated sea surface temperatures associated with bleaching events. In field observation from the Great Barrier Reef and the Red Sea, the authors observed an increased fluorescence/color in the sun-side (upper branch sides) of many Acropora coral species.  This vivid coloration was especially pronounced on the upper surface of table Acropora coral colonies.

As study co-authors Joerg Wiedenmann and Cecilia D’Angelo commented on Coral-List a few days after the initial observation:

“As increased light levels can act synergistically with high temperatures (and other factors) to induce coral bleaching, the observation of increased fluorescence ahead of bleaching might be indicative of light stress, for instance due to calm water conditions.

Taken together, there are potential explanations for the increase in colors observed ahead of bleaching. However, it would need some specific measurements to elucidate this particular case as also other factors might stimulate the production of fluorescent pigments.”

The phrase “swan song” is a reference to ancient folklore that the Mute Swan (Cygnus olor) is completely mute during its lifetime until the moment just before it dies, when it sings one beautiful song.  It’s ironic that some coral species may survive centuries until their subtle, muted tones give way to a final, spectacular swan song of color.

5 Replies to “Color Me Stressed”