What hid’st thou in thy treasure-caves and cells?
Thou hollow-sounding and mysterious main!
– Pale glistening pearls, and rainbow-colour’d shells,
Bright things which gleam unreck’d-of, and in vain!
– Keep, keep thy riches, melancholy sea!
We ask not such from thee
Felicia Hemans, 1827 The Treasures of the Deep

Just when you think you have the basics down, just when you show signs of getting comfortable with your zoology, a profound discovery is uncovered that will rewrite molluscan, larval ecology and invertebrate zoology texts. The Victorian era was a mad dash for naturalists as they observed and cataloged much of the animal diversity we know of today. But in the sea their treasure hunt was limited technologically. Only in the last 115 years, since the results of the Challenger expeditions were published, have been able to continuously characterize the deep fauna.

Between the 1850’s and 1870’s all known gastropod (including the pelagic sea angels, known as pteropods) larvae were discovered. In the intervening 125 years we thought we had a clear understanding of molluscan larval forms. Life at hydrothermal vents were discovered nearly by accident in the 1970’s. During the last 30-40 years many invertebrate texts have been rewritten and evolutionary relationships among marine organisms, shallow and deep alike, have either become more clear or more confounded with this rapid influx of new information. Larval forms from deep-sea animals are typically similar to shallow forms. With the recent discovery of a new larval type of the deep-sea vent gastropod Ifremeria nautilei, this rule is broken.

In a large collaborative effort between US and Japanese teams, Reynolds and colleagues uncover the first example of a free-swimming pre-veliger larva. This finding is an unique as the snail itself. Ifremeria contains bacteria in its enlarged gills that use hydrogen sulfide (i.e. rotten egg gas), and some may be able to utilize methane, as an energy source to fix carbon into what becomes food for the snail (called chemoautotrophy). This symbiosis is rare in gastropods, even rarer though is a chemoautotrophic snail that broods its larvae in its head-foot (see image below).

Anders Warén is a Swedish naturalist at the Royal Museum of Natural History in Stockholm who described this new snail, with his colleague Philippe Bouchet, nearly 20 years ago from a French expedition. Since the 1980s these two prolific malacologists have described the majority of the gastropod fauna from hydrothermal vents. Their thorough taxonomic and morphological work has generated a multitude of hypotheses which have birthed a very fruitful line of research into the evolution and physiology of these animals. Included among these discoveries is the discovery of the brood pouch in Ifremeria nautilei. Reynolds and colleagues honored Warén’s extensive contributions to science by denoting the novel larval form as Warén’s larvae*. 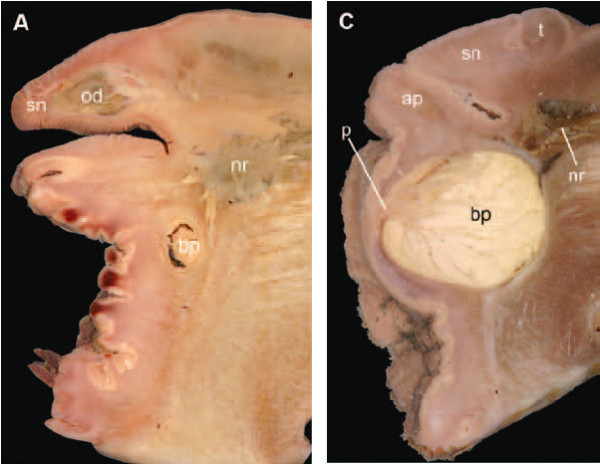 Section through head-foot. Foot is to the left and snout (sn) is on the top. A) empty brood pouch (bp); C) bp full of embryos.

Warén’s larva is very different from the typical trochophore larvae of gastropods. As the authors state, even the most widely accommodating definition of a trochophore larva cannot be applied in this case. Among the key novelties of this larval form is a free-swimming pre-veliger stage, larval cuticle, swims with its posterior end forward. This discovery will certainly cause larval biologists to more closely at other deep-sea gastropods. Warén himself has confirmed a free-swimming pre-veliger stage in another closely related gastropod genus, Provanna. Therefore it appears that this novelty is not associated with just brooding or vent habitats although Reynolds and colleagues hypothesize that brooding larvae would be advantageous in this case:

The enhanced dispersal capacity afforded by this free-swimming stage would convey a significant advantage in the patchy and ephemeral habitats of the deep sea. Longer dispersal times increase the area that a larva can travel before it must settle, and thus the probability that a larva will encounter a suitable habitat patch. Encounter is a necessary precursor to larval detection of, and response to settlement cues. In any case, development of a novel mode of internal brooding in conjunction with planktonic early development is remarkable and challenges the assumption of similarity in life-history strategies between shallow-water marine species and their deep-water relatives. 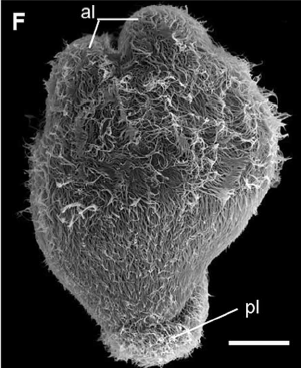 * Knowing Anders personally and having many fantastic discussions with him over the last 5 years, it my distinct pleasure to announce this prestigious honor on Deep Sea News. In addition to being a terrific scientist, he is a wonderful person with an amazing natural curiosity.