Summer and fall follow predictable rhythms here in Northern California, both above and below sea level. 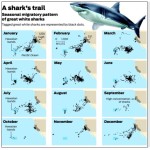 John McCosker, legendary  shark  expert and chairman of aquatic biology at the California Academy of Sciences has been following the comings and goings of Bay Area great whites for over 30 years.  When he started, not much was known about them except what was blared across newspaper headlines whenever a human was attacked. Over the years, McCosker has assembled a fairly complete picture of our annual shark-a-palooza.  The graphic to the left illustrates the seasonal flash mobbing by great whites along the northern California coast.

Great white sightings have apparently been increasing over the years along the Northern California coast–especially in an area of high great white concentration that has been sensationally labeled the “red triangle”.  All of which may indicate a growing semi-resident population.  Either that, or more people are participating in marine recreational activities like surfing, kayaking, and boating.  Perhaps more likely, it’s a combination of both of these factors.

I’ll never forget my first great white shark sighting here in SF.  It was during a whale watch expedition I was supposedly leading as naturalist for The Oceanic Society.  This particular trip, in September of 2001, was a half-day excursion out to the Farallone Islands, located roughly 27 miles (43 km) outside the Golden Gate.  Like many of my experiences traveling out to the Farallones, the conditions were what I would call victory at sea: huge swell, salt spray in the air, and limited visibility.  Needless to say, my Dramamine was woefully insufficient for the conditions. Like many on board, I was feeding the fish.  Frequently.

After several miserable hours, we arrived at Southeast Farallon Island and the impressive sea lion, elephant seal, and fur seal rookeries there.  With the ship engine idling, I could hear the familiar, rasping “bark” of  marine mammals.  All accompanied by the acrid, ammonia stench of centuries of seabird guano accumulated on the island.  Refreshing.  Realizing it was time to “naturalize,” I heaved my bulk out from the safe comfort of the life preserver storage closet to stand, white-faced, at the stern and compose myself.

As I prepared to launch into my spiel, someone pointed behind me shouting, “Shark! Shark! Shark.” We all turned to witness enormous splashing at the surface only 40-50 feet away.  A large red stain and pink foam began to form in the water.  Every so often, the tip of a fin or a glimpse of a shiny black back could be seen above water.  What appeared to be a pinniped of some sort (seal or sea lion was impossible to tell from our vantage point) was being quickly disemboweled and dispatched by one of the Farallones apex predators.  We could all see the snow-white cross-section of blubber along the edge of massive bite marks on the marine mammal’s body.

It was exciting.  It was majestic.  It was one of those once in a lifetime moments that we would all remember.  Just as I will always remember immediately hurling the contents of my stomach right on top of this magnificent display of raw nature.  At one point, a segment of the pinniped’s intestine had drifted from the scene of the attack to just below the stern of the ship and for one fleeting second I thought perhaps that it must have come from me.

We take our white shark season seriously here in San Francisco.  Sea Stewards, a local non-profit conservation organization committed to promoting sound stewardship for sharks through education, outreach, and advocacy, is planning to host Sharktoberfest II, an entire month celebrating the return of great whites en masse to the Gulf of the Farallones National Marine Sanctuary.  I certainly plan to be there.  If you’re a local or visiting SF in October, come celebrate with us.  I can personally guarantee that great whites are a lot more exciting to watch than swallows returning to Capistrano.

Just don’t make me get on a boat again to prove it.

One Reply to “NOM NOM NOM”