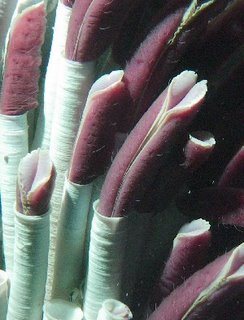 These links have no mouth or anus.

Carnival of Evolution #27 is up at 360 Degree Skeptic. Lots of good stuff on the menu there!

Of interest to many of our readers, the online open-access journal PLoS One announced it is starting a collection for tracking marine animals. The POST (Pacific Ocean Shelf Tracking) collection aims to provide “a tool for researchers from agencies, universities and other organizations to track marine and diadromous animals along the continental shelf of the west coast of North America.”

Speaking of PLoS, they have launched their own blog network! Lots of great scientists and science journalists are in their initial line-up. Check out Liz Allen’s announcement to get the background on the network and introduction to their bloggers. I really like the sleek look of the website, this is one to pay attention to!

Mark Schrope at the Nature Network discusses the “dueling datasets from the deep“. Our very own Dr. M already discussed both papers here, but Mark goes into more detail about the discrepancies between the two studies and they are actually telling us two different stories.

The Nature Conservancy has an article up about a really cool discovery, an armored catfish that eats wood!

There is a really cool newish blog about life in museum jars called The Life You (and I) Never Knew. Check out this cool post about art imitating eel scales.

A very informative feature article by Rebecca Kessler at Conservation Magazine about how runaway antibiotic use and inappropriate disposal has caused problems for sea life.

This was obviously one sick whale. Bogomolni noted a greenish froth and congestion in the lungs, signs of a severe pneumonia. The brain was inflamed, its blood vessels riddled with lesions, and its outer membrane hemorrhaging, indicating another serious infection.

When the lab work came back a few days later, it revealed something unexpected: a number of microorganisms normally associated with infections in humans, not marine mammals. Equally intriguing, the whale was harboring several bacterial strains that were resistant to multiple antibiotics. Did one of those eyebrow-raising bugs cause the health problems that triggered the whale’s stranding?

National Geographic is reporting the mystery of the massive Christmas Island crab swarm is solved. Of course there are lots of crabby pictures!!

J. Nichols has some interesting details about new research published in Marine Pollution Bulletin on plastic in leatherback sea turtles, seabirds and sand.

Seafarers will enjoy this piece at Bowsprite about how to simulate the tugboat feeling when you are off the water. Substitute fisheries vessel or research vessel.

The majestic and mighty sea mouse is now a model organism for nanowire engineering, New Scientist has the details and the study.