This is a guest post by Chelsea Rochman. Chelsea is a doctoral student in ecotoxicology at University of California Davis and San Diego State University.

“Oh NOOO!” you say, “Not another article about plastic in the ocean??? What can possibly be invisible about it?” We see plastic litter just about everywhere we go. However, what you don’t see is the toxic contaminants associated and attracted to plastic debris once it hits the marine environment. This is what I work on—I am a graduate student in a joint Ecology program with San Diego State University and UC Davis studying some ecotoxicological aspects of plastic debris. 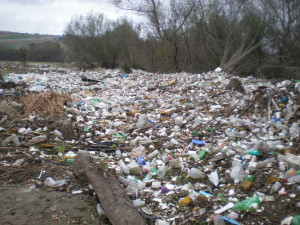 Plastics contain many chemicals upon manufacturing such as flame-retardants, aromatic hydrocarbons (from the oil plastic is made out of), Bisphenol A, and phthalates. All of these can be toxic at certain concentrations, as we know the dose makes the poison. Once in the ocean they adsorb (attract to its surface) concentrations of pesticides, fuel contaminants, and industrial chemicals at 1 million times the level in the water column (Mato et al., 2001).

Are these chemicals such as BPA and phthalates leaching off of the plastic into the ocean water? Or even worse, are they leaching off of the plastic into marine organisms upon ingestion? Scientists love to ask questions and a popular one is often, “SO WHAT?” This is a question I would like to attack. If sea life is living among this plastic debris, and we know it is, then “SO WHAT?”  I aim to answer this question from the perspective of an eco-toxicologist: what is the fate of contaminants to and from plastic debris in the ocean and how are these contaminants moving through the food web? What are the negative effects of this movement to marine life? 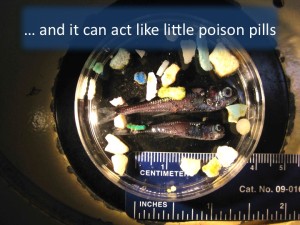 Photo taken by James Leichter aboard the SEAPLEX cruise

In San Diego, I measure how plastics adsorb organic contaminants to their surface in the San Diego Bay. By deploying contained samples of virgin plastic pellets from the factory into the water we can look at the type, amount of pollutant and concentration over time in a more controlled setting. This allows us to better understand how plastics adsorb pollutants and if different plastics behave differently. We can also get an idea of what pollutants are in the San Diego Bay by using plastics as a monitoring tool. In Davis, I am working on laboratory experiments to better understand what happens when trash becomes food. Upon exposing fish to plastic debris included in their diet we can look at certain toxic endpoints such as survival, weight loss, body burden, histopathology, and immunochemistry.

My favorite aspect of my research is the time I get to go out into the field, the big open ocean. As you may know, there are large accumulations of plastic in the open ocean which have been given several nicknames such as “the great garbage patch”, “the gyre”,  “toxic soup”, and “ocean landfill.”  Last August I got the opportunity to be one of the scientists on the SEAPLEX cruise to the North Pacific Subtropical Gyre led by Miriam Goldstein.  This November I am planning to set sail across the South Atlantic to investigate plastic pollution in the South Atlantic Gyre region. 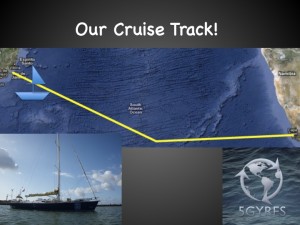 On this cruise I am planning to deploy a brand new instrument by Aqualytical that can capture a wide range of contaminants in the water. This device can retain both polar and non-polar compounds in one sweep. I will be looking for both chemicals associated with the plastics such as Bisphenol A and phthalates as well as persistent organic contaminants such as pesticides, aromatic hydrocarbons and PCBs.

I also plan to collect salps and fish tissue to measure bioaccumulation of chemicals associated with the plastic debris. In addition plastic samples will be collected to see what pollutants are adsorbing to the plastics in this location. Upon collecting samples, I have to be very careful in order to avoid contaminating the samples with chemicals from the boat or other equipment we may have. This is done with certain techniques such as baking all glassware and foil that will be used to collect samples at 450 degrees C for six hours and never allowing the samples to come in contact with your skin. All samples will also be stored at -20 degrees C in order to preserve the chemicals in the samples until analysis.

While this cruise will be full of lots of exciting research it will also be filled with adventure! We will be on a sailboat (can anyone say seasick!) exploring the waters of the South Atlantic. The organization running the cruise, 5 Gyres, is a nonprofit that focuses on the issue of marine plastic pollution. They work in collaboration with Algalita Marine Research Foundation, and through education and outreach they are responsible for alerting the masses about this environmental issue. Throughout the past year they have visited the North Atlantic and Indian Ocean, and you can follow along on this upcoming voyage across the South Atlantic on their blog.

I am currently working hard to help fund this cruise. Analytical Chemistry is not cheap, and as a PhD student the money is not always flowing. However, researching the toxicological aspects of this issue is extremely important in order to understand how this debris might be affecting the marine life. 5 Gyres has offered to pay for my trip, and I am scavenging supplies for my research from my existing research funding. So I’m all set – if I can just get to Brazil and back from South Africa.

My goal is to raise $2,350 in order to to cover my flight as well as carbon offset credits ($200). Any funding over the goal will be used for sample analyses. (You can learn more about my research here.) Any help is greatly appreciated and I will reward those who can help pitch in for a cleaner ocean! To see more please visit my Kickstarter page.

7 Replies to “Guest Post: The Invisible Side of Plastic Marine Debris”