A recent article in New York Times indicates that the Gulf of Mexico avoided the worst of our predictions and recovery is already abound.

Marsh grasses matted by oil are still a common sight on the gulf coast here, but so are green shoots springing up beneath them. In nearby bird colonies, carcasses are still being discovered, but they number in the thousands, not the tens of thousands that have died in other oil spills. And at the mouth of the Mississippi River, the zone of severely oxygen-depleted water that forms every summer has reappeared, but its size does not seem to have been affected by the Deepwater Horizon spill…“Based on what I have seen so far, it could have been a lot worse,” said Lisa DiPinto, acting chief of NOAA’s marine debris division…In many cases, there is no longer anything to see. Oil has washed away, leaving grass that appears healthy. “I would have expected rapid die-off,” Mr. Hales said, “but that’s not what’s out there.” 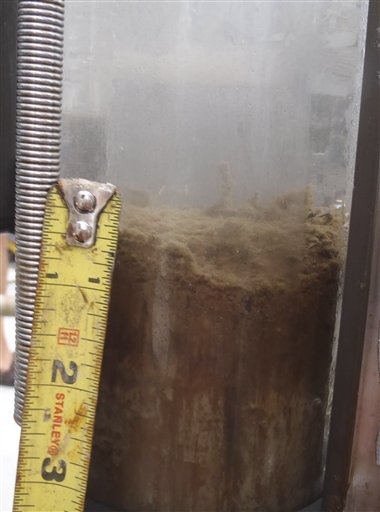 This undated handout photo provided by Samantha Joye, UGA Department of Marine Sciences, shows a layer of oil on a sediment core. Researchers are finding oil dripping "all over the place" on the Gulf of Mexico sea floor, some as much as two inches thick. A University of Georgia scientific cruise is collecting at least ten instances of what appears to be fresh oil on the sea floor emanating out from the site of BP oil rig disaster. (AP Photo/Samantha Joye)

Buried 2 pages into the NYT article, because nobody want to read the bad news first and how the Gulf may avoid direst predictions makes for a better headline, we see the picture may not be so rosy.

Scientists have reported droplets of oil associated with blue crab larvae. Marsh plants that appear healthy are still likely to be stressed and less tolerable of other environmental perturbations.  Fishermen are still finding oil.  The affects of bioaccumulation in the food web will not be realized for some time.

And…most of the oil may be on the deep-sea floor. Researchers from the University of Georgia just on Sunday found 2 inches of oil on 10 of 14 sample cores taken on the ocean floor, some as far as 80 miles from the spill site. Under this oil layer were dead organisms.  Ian MacDonald summed it up best with his statement. The oil “did not disappear,” he said. “It sank.”

The impact of the oil spill is likely to greater in the deep sea and not just because that is where the oil went.  Deep-sea organisms are longer lived, slower growing, and produce fewer offspring.  For the same reasons why deep-sea fish cannot be sustainably harvested, deep-sea organisms will also be less likely to recover from this massive of a perturbation.

One Reply to “The Oil’s Impact On the Gulf”