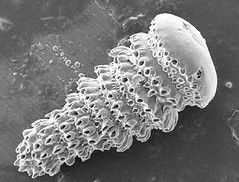 Do NOT F$#% WITH FORAMS. FOR REELZ GUYZ!!1! Skeptic Wonder has a nice article on a how a deep-sea foram lashes out its “legs” to catch out and devour nematodes much bigger than itself.

Follow the Deep Coral Expedition 2010 in the Gulf of Mexico.

Oceana has a deep sea cruise going on right now and has a report and some ROV video from seafloor exploration off Key West.

Popular Science has an article about a husband and wife team who built a 19th century wooden submersible. Totally badass!! I see a new father and son project on the horizon.

6 fish parasites you don’t want to miss… or catch over at Deep Type Flow.

Everywhere on the seafloor, it is littered with the remains of a diverse assemblage of the remains of beaked whales. At least paleo-seafloors, Tetrapod Zoology has the story and a photo of a rather unusual beak.

Are planets out there in our universe ecosystem habitable, or merely in a “habitable zone”? Brian discusses the difference.

Interesting report at Scientific American about a giant extinct penguin that may have ditched the “penguin suit” for more colorful attire.

Flickr slideshow from Neptune Canada: Deep-sea creatures and sulfide towers at Endeavour Ridge Marine Protected Area. This is one of only a handful of hydrothermal vent MPAs.

Get to know your New England Bioluminescants over at Creaturecast!

Rob at gCaptain asks if we have learned anything about the tragedy of the Gulf of Maine.

Is the world aware of the disaster that occurred on the Grand Banks, which is perhaps one of the greatest disasters mankind has ever inflicted upon the environment? Well for one, Thailand, Malaysia, Sri Lanka and Indonesia haven’t quite got the memo so-to-speak. When my parents were sailing through these waters a few years ago, fleets of draggers were seen criss-crossing the ocean, dragging up everything in their path.

Also at gCaptain, new tactics from Greenpeace, who spares no expenses in developing new ways to accomplish its goals…

What goes down the drain, goes out to sea. Bluegrass Blue Crab has the next installment – Sewage – in my favorite Southern Fried Science series, the Chemistry of the Great Big Blue.