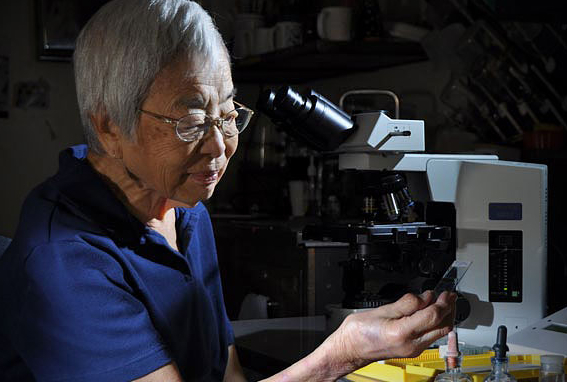 It’s with a heavy heart that I report that Dr. Isabella “Izzy” Abbott, scientist, passionate ocean science educator, and the foremost expert on central-Pacific algae, has passed away on Thursday, Oct. 28, 2010.  She was 91.

Born in Hāna, Hawaii, to a Chinese father and Hawaiian mother, Dr. Abbott enjoyed a prolific career in ocean science with more than 100 research papers and numerous books to her credit.  More than 200 algae owe their discovery and scientific names to Abbott. Several species have been named after her, along with an entire genus—Abbottella, which means “little Abbott.”

I had the great fortune of meeting Dr. Abbott two years ago during the US Coral Reef Task Force meeting on The Big Island.  She was an honored guest and speaker during a luncheon celebrating the 4th Annual Living Reef Awards, a recognition of local coral reef conservation and education leaders.  Dr. Abbott was being recognized with a Lifetime Achievement Award.

I remember her excitement in describing her love of the much under-appreciated diversity of tropical marine algae, and her child-like wonder in the joy of discovery. And I recall how–even at 89–she looked forward to many more years of exploration of marine alage, especially those yet to be identified from the Papahānaumokuākea Marine National Monument.

It was only yesterday in my office with Miriam Goldstein that I had taken Dr. Abbott’s book, Hawaiian Reef Plants, off my shelf as I explained to Miriam how it was the definitive guide to tropical Pacific seaweeds.

I only had a very short exposure to the “First Lady of Limu“, but I know that she was an inspiration and mentor to many ocean science colleagues in Hawaii, here on the mainland, and around the world.  She was an exemplar to generations of ocean scientists, to women in science, to Pacific Islanders in science, and her legacy will resonate far into the future.

Mahalo nui loa, Dr. Abbot, in every sense of those word–enormous gratitude, admiration, praise, esteem, and respect–for your contributions and spirit.