145 million years ago, in the Cretaceous, the air was warm and the seas were high and rum flowed freely.  On land, mammals were oppressed under dinosaur Republican rule.  Massive reptiles and ammonites, long since extinct, dominated the oceans.  Under the reign of these giants, the lizardfishes were mere fledglings.  Today, the 256 known lizardfishes represent an amazing span of anatomical novelty.  Tubular eyes facing front, tubular eyes facing top, telescopic eyes, tiny eyes, and nonexistent eyes all exist in the lizardfishes.  Hermaphroditism, an extreme rarity among vertebrates, is mundane in lizardfishes.  But what necessitated these adaptations? 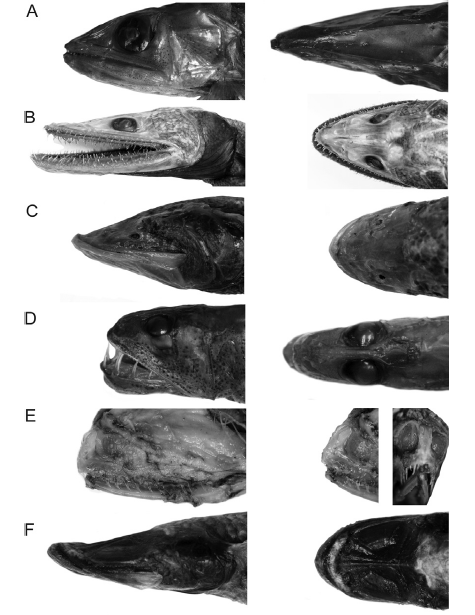 Life in the deep can be total @#$%.  No light, cold temperatures, a lack of food, extreme pressures indicative of this remote habitat all select for creative strategies to survive.  In deep-sea fish, bioluminescence attracts scarce mates and prey.  Large mouths with dagger-like teeth ensure prey don’t escape.  Modifications to eyes allow for the detection of faint and residual bioluminescence. Containing both male and female parts ensures all encounters with a member of the sames species result in hanky panky. But when and how many times did these curious novelties arise in the evolution of lizardfishes?

Davis and Fielitz, using a wealth of genetic data ground with fossils,  detail the evolutionary history of the lizardfishes.  The first lizardfish probably occurred in very early in the Cretaceous or even in the last part of the Jurassic. In a short 3o million years after many of the major groups of lizardfishes arose.  During this period lizardfishes dwelled in the shallows and likely benefited from the great abundance of coral reefs that occurred at the boundary of the Jurassic and Cretaceous.   Through a single evolutionary event, hermaphroditism arose in the group with all subsequent species inheriting this advantage. 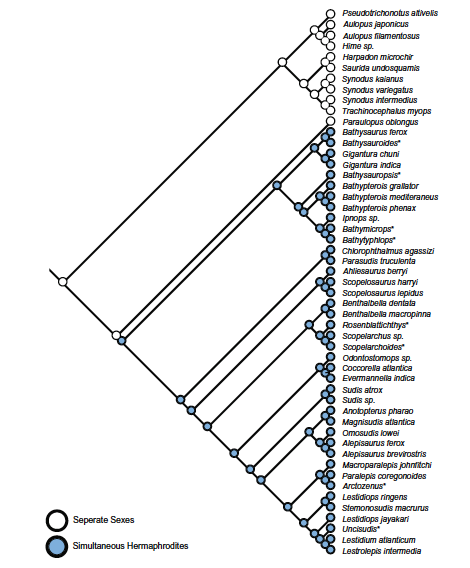 On the other hand the evolution of different eyes types was much more twisted.  Elliptical or slightly flattened eyes evolved twice as well as up-facing tubular eyes. All these adaptation arose from an ancestor with round and sideways facing eyes.  Telescopic front facing eyed fish, as wells as reduced eyed fish, arose from the elliptical or slightly flattened eyed ancestor. 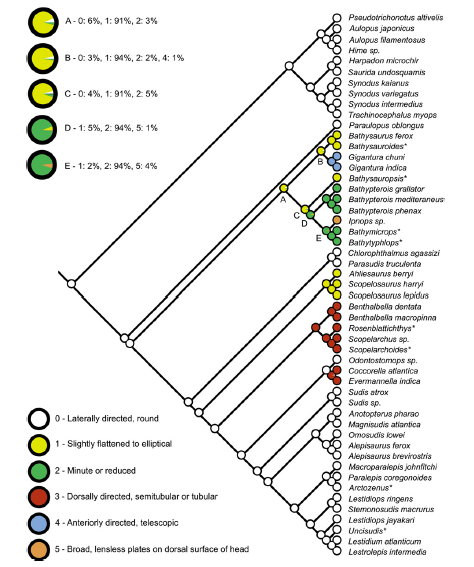 Be memorized by the rainbow of colors in evolution! Colors correspond to eye type not fish color...

These multiple and independent evolutionary events indicate that different groups of lizardfishes converged on similar solutions in facing the ocean’s demands.  But sex…well once is all you need.

5 Replies to “Of eyes and sex in lizardfishes”