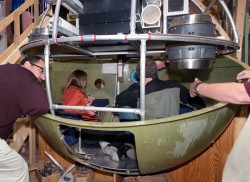 Alvin’s interior will be getting a redesign as a new larger titanium has been forged.

It is 3, rather than 2, inches thick, with an interior diameter that is 4.6 inches wider than Alvin’s current sphere. That increases the interior volume by nearly 20 percent, from 144 to 171 cubic feet, and that additional space has opened up a range of new possibilities.

The interior of sphere is small, just barely large enough for a pilot and two scientists to sit, not stand, but not enough room for seats or bathroom.

For up to eight hours, they sit on thin pads on the floor and peer out windows, or viewports, the size of teacup saucers. The pilot drives while perched on a small metal box.

The Alvin overhaul sees upgrades across the board with better batteries allowing for 12 hour dives and 6500m, 2000m deeper than before.

via Alvin Gets an Interior Re-design.