Long time readers will know how perverse and socially inappropriate the unseemly sea squirt is. But there is an interesting property of sea squirt pornography and local oceanography that may have consequences in the debates surrounding marine reserve design. Castillo and colleagues examined the spawning behavior of intertidal tunicates (Pyura praeputialis, an invasive) from the Chilean coast. What they found will make all decent folk turn their insides out. These filthy denizens of the shallow seas let it all out – TOGETHER! Oh the indecency. You may want to ensure your children are tucked away in their cozy beds and sound asleep before continuing on. 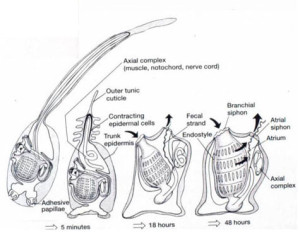 Sea squirts typically have mobile tadpole-like larva that doesn’t feed and whose sole purpose in life is to disperse. The also do not stay in the water column for too long, preferring to stick their heads to a rock and metamorphose into a filter-feeding adult (see figure at right).

But the interesting bits happen before life as larva begins. When egg and sperm meet in seawater there is an explosion of bio-foam. This foam is created by surfactants in Pyura‘s gametes, reducing the surface tension of the seawater. Since sea squirts spawn en masse, the high concentration of gametes entrained in tidal channels releases a lot of these surfactants all at once, which react with the seawater and proteinaceous debris in the water. This reaction creates an astonishing bio-foam that reduces the surface tension of a large area that prevent larvae from being carried out to sea and are thus retained in the tidal channel. 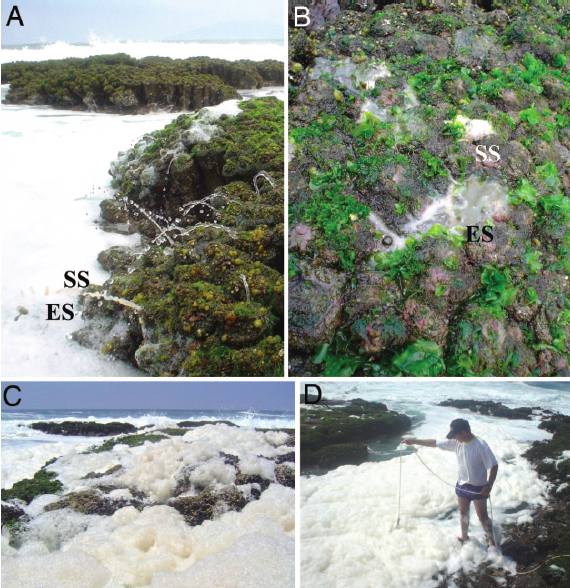 So what is the end result of this filthy, spineless mass orgy? Larvae, which are retained in the tidal channels, amass large colonies over several generations. The genetic diversity encompassed by these colonies are not trapped here though since, as shown with the ping pong ball experiment, nearly half of the larvae may still escape out to sea where they can start new colonies perhaps in other tidal channels. What this also suggests to me is that during the foamy times, other larval forms and plankton from other organisms are also retained. Therefore this bio-foam acts as a resistor to the current pulling larvae out of tidal channels.

This has some implications for the debate over the “Single Large Or Several Small” (SLOSS) dilemma facing marine reserve designers. For instance, if rare or endangered species occur in these tidal channels you might want to protect the channels. It is acting as a quasi-reservoir for recruits. Populations may  build up in these channels and potentially send out more larvae with each generation. If 40-50% of larvae can escape the foam into the sea, the channel is a source for Pyura larvae. Additionally, protecting foamy channels might just protect larval sources for other species of interest.