As the publications roll out and the days roll on, we continue to learn more and more about the BP spill and its ongoing impacts. Lots of interesting stories to pique your interest this week:

Not happy with the conclusions of the Government’s National Oil Spill Commission, an independent group of academics known as the Deepwater Horizon Study group has insisted to the Times-Picayune that:

…even if nobody made that decision [to same money] consciously, BP has a corporate culture that “was embedded in risk-taking and cost-cutting,” and that played a role in the disaster.  Various investigations of the incident have found that BP was more than a month behind schedule and more than $40 million over budget on the drilling project, and that in the final days the company chose cheaper, faster ways to try to complete the project — by skipping key tests, by changing final steps to close off the well and by using a single tube to line the center of the well instead of a interconnecting series.

The ‘Should I eat seafood’ issue is far from dead—and rightly so.  The government has always insisted that Gulf seafood from reopened fishing grounds is safe to eat (since ‘sniff tests’ and other assays are negative), but that confidence hasn’t been echoed by many scientists.  Louisiana is trying to get celebrity chefs to endorse seafood in order to sustain their industry:

“We don’t have a product problem, we have a perception problem, said Kelly Schulz, a vice president with the New Orleans Convention and Visitors Bureau.

OK, there are about a million things wrong with that statement–we MAY have a product problem, but maybe we just don’t have the right equipment yet to detect said problem!!  Are you going to argue that Thalidomide was safe just because you weren’t aware of its horrors when you started prescribing it to pregnant women??  The BP spill was effectively a dilute oiling of a very large area (with the dispersion and breakup of oil promoted by adding Corexit).  I have heard talks from many distinguished researchers who worry that we just don’t have the equipment to detect the minute levels of oil components still in the Gulf.  Plus, there’s the whole ‘biological magnification’ phenomenon that we have to worry about–there’s no fishing/sales ban on tuna, but it contains methylmercury and eating too much tuna can have serious neurological consequences.   Fishermen hauling royal red shrimp recently found tarballs in their bottom-trawl nets—a stark reminder that the oil is still in the ecosystem, even if the fishing grounds are officially open.  We may have to wait years for long-term studies to assess the long-term effects of eating seafood so soon after the spill.  Meanwhile, oyster beds in Louisiana have been decimated from a combination of intense heat and preventative influxes of freshwater (aimed at keeping out the oil) this summer .

Beach cleanings are still ongoing all along the Gulf Coast; a BP Facebook chat notes that about 8,000 workers are participating in these efforts and they expect the cleaning to be ongoing through 2011.  P.S.

In terms of human impacts, more deadlines pass for compensation claims related to oil spill, but the process is really only in its infancy.  BP has already paid out nearly $2 billion in emergency payments to over 100,000 people (a type of compensation where claimants retain their right to sue).  Residents in hard-hit Grand Isle, LA (with special guest Stephen Baldwin?!) held a rally to publicize the ongoing repurcussions of the BP spill on local residents.   Financial data from Summer 2010 show clear impacts on the Gulf economy:  White sand beaches in the Florida panhandle saw a huge drop in lodging and general retail sales, probably fueled by public perceptions and tourists steering clear of the Gulf.  However, Mobile County AL witnessed a huge boom due to the concentration of officials and cleanup crews who invaded the area as the well spewed through the summer months. 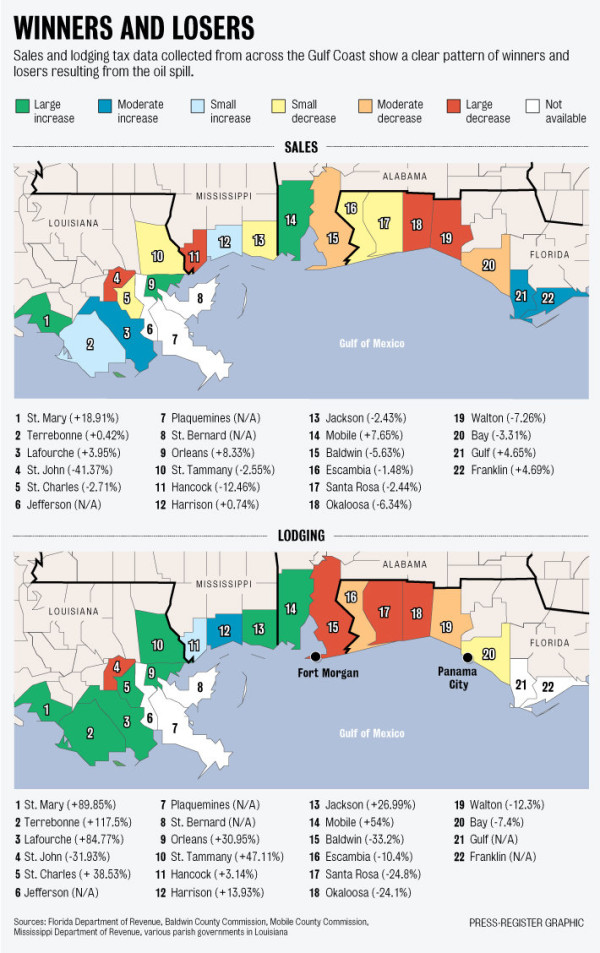 Stay tuned this week for Meeting #6 of the National Oil Spill Commssion on December 2-3;  the discussions will be webcast live on the website for anyone interested in watching.  Or alternatively, check the blog next Sunday for the latest news from this meeting.

Remember, I need YOUR IDEAS for future blogging series related to the oil spill.  Comment below or twitter shoutout @Dr_Bik!