Undoubtedly you have heard that dogs can sense earthquakes before the tremors occur. While anecdotes are common, experimental evidence supporting these claims remains elusive. The USGS in the 1970’s even examined the ability of animals for prediction “but nothing concrete came out of [these experiments]”.

Cueing on changes in the weather is frequent among the animal kindgom.  Indeed, the daily, seasonal, and annual cycles of animals are triggered to changes in temperature, day length,  precipitation, among a host of other environmental cues.  But predicting the weather changes including large catastrophic weather events such as cyclones and hurricanes may be of another ilk.

Being able sense an oncoming major hurricane or cyclone would prove an invaluable trait for animal.  Storm surges can both decimate and rearrange marine habitats especially in coral reefs.  Sea snakes, frequent residents of these reefs, would be wise to pack shop and head for the hills. 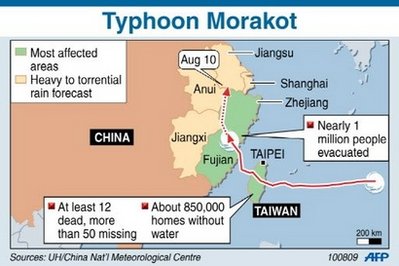 In 2009, the typhoon Morakot passed over the Philippines, Taiwan and eventually mainland China.  High winds, flooding, and mudslides caused  millions of dollars in damage and resulted in the evacuation of 1 million people.  On Lanyu (Orchid Island), Taiwan “winds gusted to 144 km/h during these 3 days. Extremely rough seas pounded the shoreline and washed heavy rocks inland beyond the beach.”  Researchers counted sea snakes in the coastal area before (July), directly before (August 5-6, labelled during below), and after the typhoon (August 12-17th).

Those scientists who drew the short straws and sampled during the typhoon found only one single snake*. It is reported this snake was scared shitless. This data suggests that snakes senses the approach of the typhoon even before it made landfall.  But what was the cue?  The scarceness of sea snakes was not triggered by either increased winds or rains. However, there was a positive relationship between counts of snakes and atmospheric pressure at sea level.

So where did the sea snakes flee to once the barometric pressure signaled it was time for them to get the hell out of dodge?  Caverns…secret cavernous lairs that are common in the volcanic rocks of the islands.

*This is the most hard core research I have ever heard of.  I got an idea let’s go sample sea snakes in a typhoon!

3 Replies to “Can Sea Snakes Predict The Future? What About Hurricanes? Lottery Numbers?”