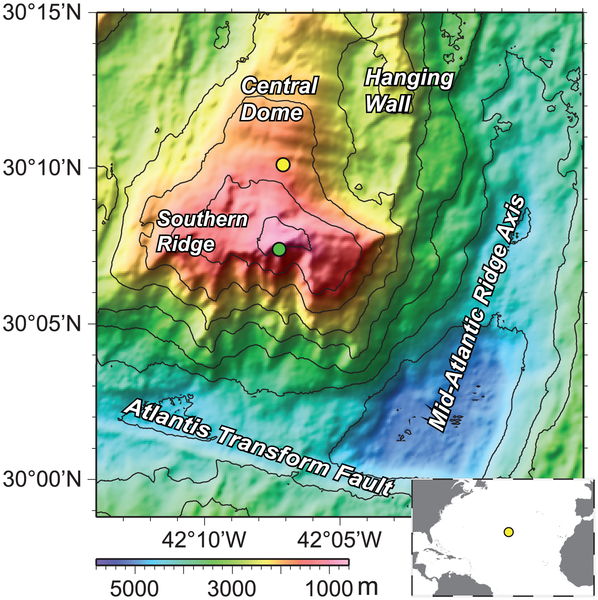 A flurry of new research is redefining our views on where life resides on Earth.  The biosphere is the zone of air, land, and water at the surface of our planet inhabited by organisms.  The operative word here being surface.  The subsurface was supposed to be void of life.  But studies within the last few years have all but killed this narrow world view.  Microbial life exists in the deep in the Earth’s crust and potentially deep into the mantle.  And there is potential it may rise from the deep Earth and infect our brains.

Much of the crust of the Earth’s surface contains a deep gabbroic layer, chemically equivalent to the basalt and formed when magma is trapped and cools beneath the Earth’s surface, i.e. plutonic.  This layer is closest to the mantle. The two are close friends, i.e. platonic.

A new paper in PLoS One details work conducted in the North Atlantic on the Alantis Massif (a massif is section of the Earth’s crust pushed up that maintains its internal structure and in some areas a very large dog). This feature is 16 kilometer wide dome rising 4250 meteres off the seafloor and within 700 meters of the surface. Importantly, the gabbroic layer here is within 70 meteres of the seafloor.  As part of the Integrated Ocean Drilling Program, cores were drilled down from 0.45-1391 meters, with temperatures near 102˚C, deep into the gabbroic layer.

Using DNA sequencing, the reserachers uncovered the existence of microbial life deep in the crust. Depauperate of numbers and diversity at less than 1000 cells per cubed centimeter of rock, proteobacterial lineages kin to bacteria from hydrocarbon-dominated environments dominated.  By using targeted analyses looking for specific metabolic genes, the researcher determined the proteobacteria were able to degrade methane and touluene, i.e. hydrocarbons; reduce sulfate, nitrate, and metals; and fix carbon and nitrogen. The carbon-13 values, a way of fingerprinting where an organism derives its carbon, for the microbes were more similar to the hydrocarbons found in rocks around them as opposed to the ocean above.  As stated by the authors “Our results raise the intriguing possibility that hydrocarbons in very deep ocean rocks support microbial communities.”

This study also widens our view about where life could exist on other planets.  As the authors of the study point out , methane may exist in the subsurface of Mars and may harbor methane-consuming prokaryotes. 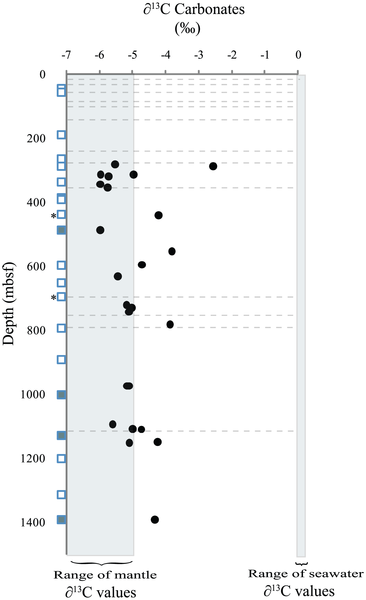 Carbonate ∂13C isotopic values were measured at various depths over the 1400 mbsf interval. Faults are indicated by dashed lines. Samples collected for microbiological analyses are indicated by squares to the left of the graph of carbonate ∂13C isotopic values; unfilled squares indicate that ribosomal DNA was successfully amplified from a sample; solid squares indicate that no ribosomal DNA was amplified. Samples that were analyzed by microarray to assay for functional genes are denoted by *. From Mason et al. 2010