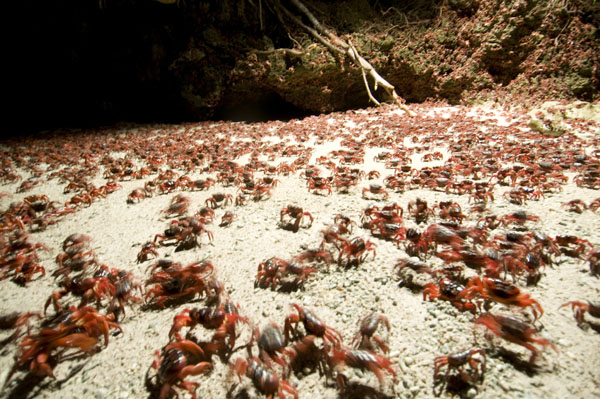 Christmas Island red crab migration. Each year they travel from the forest to the seashore to breed.

National Geographic embarked on an ambitious two and a half year film project, covering over 420,000 square miles, and telling the story of animal movements for a wide variety of animals. There are several awestruck moments. One of the best stories they told in my opinion was about the multiple generational migration of the monarch butterflies. My 3 year old daughter was entranced by the footage and was thrilled to see thousands of them clumping together on the branches of trees in Mexico.

There were several marine examples though of particular interest to Deep Sea News readers. The Great Migrations film crew followed pods of sperm whales that converged on the Azores to mate, penguins clambering like mad on the rocks of the Falklands to jostle in place for their ritual wooing of their partners, elephant seals and walruses, seabirds and whale sharks, great whites and stingless jellyfish all have their stories told. Whether migrating for food, sex, or a better climate narrator Alec Baldwin sings the song of survival, including all the hardships along the path.

In seems to me to be the most difficult, harrowing and ultimately a heroically devastating migration, the Christmas Island red crab (Gecarcoidea natalis) must  wrestle its way through dense jungle filed with ferocious, eye-stinging ants, traverse steep, rocky terrain, leap off cliffs to get to their spawning grounds. By far my 5 year old son’s favorite part of the series. He is still asking to see the crabs. On the edge of his seat as they attempted to scurry past armies of ants spraying acid in their eyes and laughing as the females crabs were shaking their booties in the surf, he learned about the arduous path these amazing crustaceans make to take care of their offspring.

I won’t give away all the secrets to this fantastic new series. You can tune in to the National Geographic Channel Sunday, November 7 at 8pm ET/PT. More information, footage, pictures at their Great Migrations page online. The first episode is Born to Move and is probably my favorite of the 4 main episodes. I could clamor on about all the other cool footage and stories they told but you really need to see it for yourself! If you are not convinces (I mean come on! Its Nat Geo, you know its going to be good!) here is some penguin footage. There is something about huge numbers of penguins being battered by enormous waves that sends my kids in a hysterical laughing frenzy, apparently its comedy night at the Falklands!

While the four main episodes of Great Migrations tells the stories of the animals, a real hidden gem, and what  thought was the best part of the whole series was their fifth episode, Science of Great Migrations. The producers and film crew followed the research of three groups of scientist studying elephant seal movement, the intricacies of placing a miniature radio transmitter on light-as-a-feather butterflies, and elephant conservation and behavior. The enthusiasm contained by the butterfly researchers was exciting, as they developed and tested the radio transmitters then went looking for their tagged test subjects. Genuine love for their work was masterfully conveyed. But, on the other hand, the sincere dedication and years of hard won data and work of the elephant researchers was rewarded by massive flooding of the village the made their homebase in, losing years of work.

It is wonderful that they choose to show three very different stories of researchers and how they developed from scratch very innovative tools for their work. As a scientist communicator I value the work that National Geographic did in this regard. It is very clear that these were passionate scientists, they effectively communicated the importance of what they were doing, they conveyed the thrill of doing the research and being out in the field and developing new technologies to answer their questions, and wonderfully showed the human side of scientists. Scientists too get frustrated, have to undergo extensive trial and error, and don’t always have things go their way. I hope the public doesn’t blow off this very important segment, because it puts all the storytelling of the first four episodes in context, along with the Behind the Scenes which tells the stories of the film’s crew and producers.

With the recent masterful work of the BBC, i.e. Planet Earth and Blue Planet, it is tempting to compare Great Migrations as National Geographic’s answer to them. In fact, that was one of my intents when I first sat down to write this review, originally titled “Great, but not greatest”. But after thinking about it carefully, I came to the conclusion that these really serve two different purposes. The imagery and videography were beyond words for all of these movies as we would expect from these talented organizations. But the storytelling was very different and this is what sets them apart. Planet Earth, in particular, was really meant to highlight biodiversity. They purposefully went out of their way to document behaviors in animals that rarely made the big time in nature documentaries. It was wonderfully produced, and remains my favorite for all time nature series, but the storytelling was meant to awe and inspire.

Great Migrations, on the other hand, described less animals but really delved into the details about their lives and behavior. The storytelling here was geared to educate and intended to be more comprehensive. They followed entire migratory paths, documented struggle and death, trailed through life cycles and paid homage to the decades of science that went into all the observations an behavior that were described. You almost need to see it through the lens of a science documentary, instead of a nature documentary. With that being said, I am sure it will remain one of the epic documentaries of our time.

More scenes below, don’t forget to follow Great Migrations at the National Geographic Channel website and Tune in THIS SUNDAY! You can also pre-order the DVDs and buy the wonderfully illustrated companion book.

All images and video clips are used with permission from National Geographic.

More perspectives on Great Migrations from:

Observations of a Nerd