A new study released today shows the first evidence of Deepwater Horizon oil entering planktonic food webs in the Gulf of Mexico (is anyone surprised?  No?  Didn’t think so. ). Researchers from Dauphin Island Sea lab and the University of South Alabama tracked levels of  δ13C across different size classes of plankton, looking for depleted levels of this isotope to signal biological uptake of hydrocarbons from Sweet Louisiana Crude oil.  Depletion of δ13C can also be caused by increased freshwater input (e.g. from nearby Mobile Bay), phytoplankton blooms, or even physical presence of oil in the water column.  However, the researchers were able to rule out all these possible causes for isotope depletion–bay outflow was low during the sampling period, chlorophyll in the water column was not especially high, and direct oil contamination could be ruled out by normal C:N ratios (which would be ‘anomalously’ high if micro-droplets of oil were present in the water or attached to the exterior of plankton).

For now, I’ll leave you with a figure which really says it all–depletion of δ13C isotopes was apparently synced with northward pulses of surface oil slicks.  The lowered δ13C values were also observed across different size classes of plankton, supporting the rapid and broadscale integration of oil hydrocarbons into the food chain. 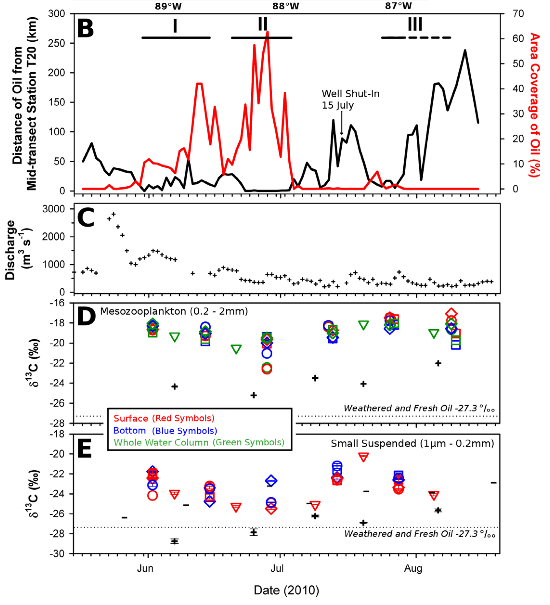 Since we know that microbes ingest oil, and now plankton apparently do too, one must ask–how long until we start finding Deepwater Horizon hydrocarbons in our secondary and tertiary consumers??