Apparently there is a study underway that is setting out to empirically determine the ole adage that trawling is bad for the environment, as reported by New Scientist (link to pdf). This is a tale that has been handed down orally from generation to generation of conservationists. Sometimes when a story is repeated many times, it is taken to be a truth. Other times when a story is handed down among many people for many generations, the message gets altered. The trawling study is done by a well-known and often well-respected conservation organization – The Nature Conservancy. It bears the weight of authority. They have done good work, when I had a little money I supported them, but that was long ago before I decided to live a life of poverty as a science missionary. 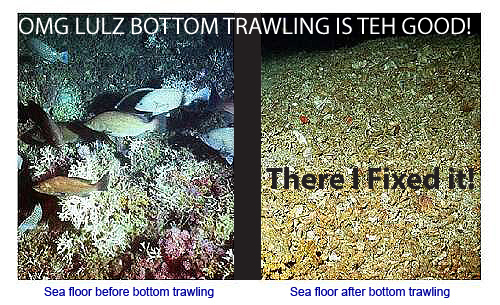 This lolTrawlng is inspired by Southern Fried Scientist and he is a coauthor should this graphc be cited in the future.

The preliminary results go something like the picture above. To be clear, it is important to do controlled, well-designed experiments to understand how trawling affects benthic communities and to disentangle confounding factors. I think this is what the Nature Conservancy and its collaborators are doing. But, it is also important to emphasize the preliminary nature of the study. You see, this study is underway and has not been published nor subjected to peer review for that matter. Readers have no way to evaluate the study design, methodology or interpretation of the data. The only materials and methods, and results, are found in the short New Scientist article:

“The team wanted to know how often trawlers can rake over a section of muddy sea floor before habitats can no longer recover. Records held by the National Marine Fisheries Service show parts of the continental shelf can be trawled between zero and 10 times a year. So last year, to mimic low-intensity trawling, four plots were hit twice. This October, they were each trawled five times, mimicking a high-intensity trawl. The Beagle took pictures immediately after each event, as well as six and 12 months after the first trawl.

Early signs indicate that marine life survived, even thrived, after last year’s trawls. Since then, the Beagle has spotted sharks, flatfish and thick schools of squid that dove, kamikaze-style, into its red laser lights. Donna Kline, a fish ecologist at California State University in Monterey Bay, thinks that far from destroying a habitat, the trawl may have created a new one by etching grooves into the flat bottom.”

When results are given out to the media that have not undergone peer review, there is an ever-increasing chance that they will be taken out of context. Of course, this happens all the time to published, peer-reviewed results. The situation is made worse though when the community cannot take into account a wide variety of what the public might think are mere details, but the philosophical underpinnings of which are greatly important to accepting any data that come out the experiment. One site, a business blog at stuff.co.nz, immediately latched onto the findings from the New Scientist article with the provocative headline: “Bottom Trawling Is Good”. While unfounded and having a high probability of being flat out wrong, it makes for a good discussion point.

The study in question examines one bay in California, that was previously trawled, but not in the last 10 years. Do the results extrapolate out to a generality of muddy deep-sea bottoms? The mounting evidence from a variety of areas around the world say no (see Google Scholar for over 21,000 references to “Bottom trawling effects”), but this study is supposed to be controlled, whereas previous studies were not designed to specifically test how trawling affects seafloor communities. In other words, the data that exists right now is circumstantial, but very well done given the circumstances. Trawled areas are compared to non-trawled areas and diversity and community metrics are calculated. This type of science is common, and valid, but remains as documentation of patterns, not necessarily as an explicit, controlled test of a hypothesis. Again, to reiterate we do not know anything about the study and it is only half-way its 5 year duration.

Not a Fairy Tale Ending

What the press will do with a story like this is run away with it because creates tension, challenges previously held ideas, and has the ironic backing of a conservation organization. There are lots of details annoyingly missing from the New Scientist article. They hint that Nature Conservancy is seeking to create a sustainable fisheries model using this research. Well, it would sure be nice to hear more about that and might give context to the OMG TEH TRAWLING IS AWSUM!!1! LULZ!!! claim. They saw that “marine life survived, even thrived”, there is more to the deep-sea than fish and sharks. I have a hard time seeing how precious, long-lived corals and sponges – 2 extensive habitat-forming species – can survive a trawl by definition. While trawling creates a new habitat, i.e. a wasteland, this doesn’t mean habitat heterogeneity will result in more species. One species’ new niche was another’s previously optimal habitat.

What this story does affirm is that extraordinary, and contradictory, claims require great evidence. Published a study midway with inconclusive results in the popular press is irresponsible on the part of the researchers and may end up hurting their causes. Stakeholders may accept these results at current value and choose to let these preliminary findings guide their decisions about trawling. Fishing lobbies may latch onto the Trawling Is Good mantra and make things even worse for the industry for those juicy, seductive short-term gains.

Furthermore, it diminishes the intelligence of the readership. People aren’t stupid. Its one thing I’ve learned interacting with non-scientists (usually at the pub) is that common sense is still alive and well in the general population. Just read the comments to the business blog’s piece. The audience struck back furiously and quickly. Its great to challenge our mores in science, we are all trained as skeptics, but it requires a certain depth and evidence to be successful. Like any good fairy tale, there is a lesson to be learned, irresponsible reporting only goes as far as you can toss a 5000 year old piece of rare deep-sea coral.

9 Replies to “From the Editor’s Desk: Benefits of Bottom Trawling and Other Assorted Fairy Tales”