I’m a contrarian.  Majority consensus makes me shudder.  I just like rooting for underdogs*.  Those undersea ridges at the boundaries of tectonic plates, spewing molten magma to form new crust are o’ so popular these days. 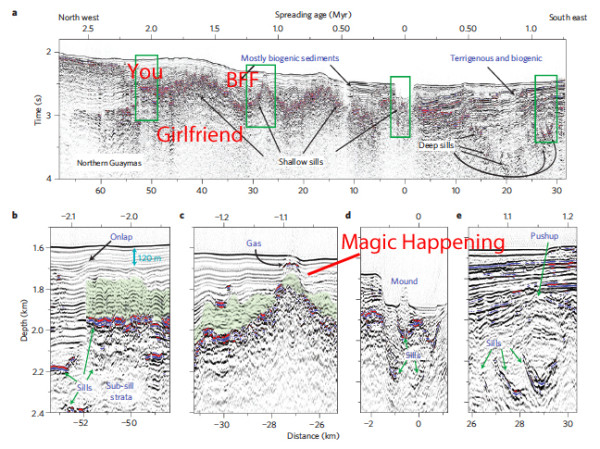 Let me explain. Over 30 miles away from these fancy spreading plate boundaries, the furthest distance ever documented, magma is rising below the seafloor surface.   However, this magma is stopped when it reaches the barrier of thick mud that covers the seafloor.  The magma forms a large horizontal sheet, a sill.  Think of that irritating girl your best friend dated long ago.  She wasn’t enough to break your friendship but she sure did intrude.  You and your friend are the mud and she is the magma. Welcome to the concept of intrusive volcanism.  “O’ pardon me.”

Unlike your best friend’s former girl, the sills are hot.  But like your former best friends girl, they produce 10 times as much carbon dioxide and methane gas.  This occurs because the sill heats the overlying mud and thermally alters it.  These rising gases can spawn biologically activity like hydrothermal vents, but all very far from the spreading center where vents were previously thought to be concentrated..

More importantly, typically deep-sea mud is thought to store carbon, i.e. sequester carbon.  But this research suggest  these magma intrusion could potentially release significant amounts of carbon from the sediment.