This public press release from Roffer’s Ocean Fishing Forecasting just appeared in my inbox, offering the latest summary of oil fate in the Gulf.  You can see from these NOAA photographs that there are many shoreline areas that still show heavy shoreline oiling (red color) as of two days ago, including Breton National Wildlife Refuge.  Low Dissolved Oxygen levels (not as current, but from September) also look like a harbinger of a persistant oil-dispersant plume underwater.   The photos speak for themselves: 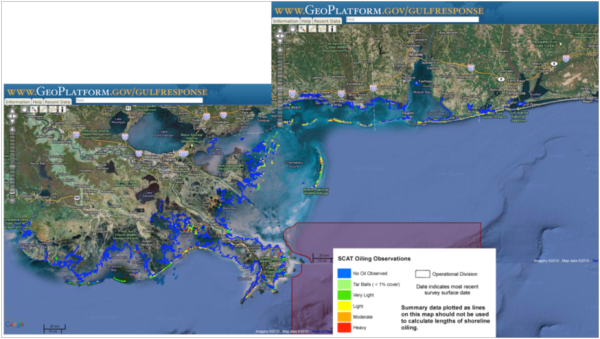 Latest (November 28-29, 2010) shoreline oiling observations derived from the NOAA GeoPlatform website (www.geoplatform.gov). The non-blue colored areas are the locations where oil has been observed. The red hashed area east of the Mississippi delta is the area closed to shrimp fishing due to the recent capture of oil in shrimp nets. Note that the oil on land extends over a wide geographic range from Florida to Louisiana. (Caption From ROFF's website)

The ROFFs site also gives a very eloquent summary of what we still don’t know regarding the effects of the BP spill:

From the many workshops we have participated and the reports we continue to receive, it is clear that a substantial amount of oil remains in the central Gulf of Mexico both in the ocean, one the sea floor, and along the coastal zone beaches and marshes. It is anticipated that this oil – dispersant mixture will continue to exist in many different chemical forms for many years and decades. The effects of this disaster remain to be determined and many of the effects may not be apparent for years to come. The impacts are likely to be seen at the habitat, organism, population and ecosystem levels. The impacts probably will range from slight degradation to total loss of essential habitats. Changes in habitat connectivity as a result of oil spill responses by humans (e.g. new beach barriers, new islands, increased freshwater outflow from pumping, digging, etc.) are already obvious. At the organism level, effects are likely to be manifested in direct injury and death (already seen), external and internal deformities, cancer and other diseases, genetic defects, reduction of feeding efficiency, changes in benthic survival, as well as, changes in social and sexual behavior. At least some of these are likely to have negative biological impacts at the population level. Changes are likely to be seen in the survival and growth at different life stages (egg to adult), changes in the reproductive potential of populations due to changes in endocrine systems (e.g. number and quality of eggs), changes in migration and distribution along with effects on the predator – prey dynamics. There is great concern whether the biological impacts at the individual and population level will have cascading impacts on food webs and ecosystems such as loss of prey species (menhaden, other herrings/sardines, jacks, shrimp, etc.) bases along with loss of large pelagic (mammals, tunas, billfishes, sharks, etc.) and benthic (e.g. snappers and groupers) species. Remember that snappers, groupers and other organisms burrow into the bottom where oil has been found and probably still occurs.

Over the entire Gulf of Mexico one needs to be cautious about apparent short-term increases in catch rates that may stem from changes in the catchability (availability and vulnerability), but not due to increases in the absolute abundance of the fish stocks. While there have been some reports in the media to the contrary, It is highly unlikely that depressed populations have increased their abundance significantly due to the relatively short-term stoppage of fishing. One needs to understand that some of the effects on the ecosystem are likely to be subtle at first, but significant over time. Apparent changes natural mortality and fishing mortality will have to be studied through fishery independent population assessments that produce size structured population estimates in space and time.

Some people have stated that the oil has degraded to the point that it is more like asphalt, i.e. rock-like in composition and no longer is a problem. We have asked these people if they would take freshly laid asphalt and put it in their vegetable gardens to grow food that they would want to eat.

I certainly wouldn’t want asphalt in my garden!!