You’ve all heard about the bone-eating zombie worm from hell. Yeah it was like OK, but whatever. It had its day like, you know, way back in the 2000s. Now though, all the rage is the BONE SNAIL! Yeah, that’s right the BoNe SnAiL!!! Its cooler than cool, just trust me. The Bone Snail is to the 2010s what the bone worm was to 2000s.It even has a pretty pimped name – Rubyspira. It is named after Ruby, the MBARI’s nearly 2900 meter deep whale carcass, and spira, meaning spiral. 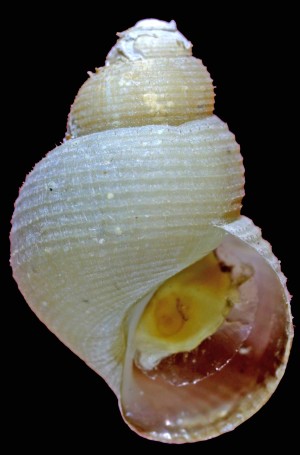 Shannon Johnson and colleagues describe two new species of this strange new AWESOME BONE SNAIL! Rubyspira osteovora (bone devourer – though they should have translated ‘boneworm devourer” instead…) and Rubyspira goffrediae (named after the talented microbiologist Dr. Shana Goffredi) lives near the whale falls in Monterrey Canyon. They appear to be closely related to other deep-sea snails, including hydrothermal vents ones. Interestingly, there are in the Abyssochrysoid group which has fossil members that were found to be in association with marine reptile and mysticete bone remains and fossil cold seeps.

While taxonomically very similar and living close together, the two new species of Rubyspira differ in their microhabitat and how they acquire nutrition. R. osteovora lives in the sediment near whale bones and has a very short, but broad, radula, possibly to scrape up bone fragments from the sediments. On the other hand, R. goffrediae lives on the bone and has a long, spiky radula, thought to be able to break apart intact bone.

Bone fragments and minerals were also found in each species guts. Furthermore, stable isotope signatures of carbon and nitrogen also match a diet based upon whale bone, including the bone-eating worm Osedax, which have a ‘root’-like system that can rapidly degrade bones, using the lipids as a nutritional source. While there is little direct evidence of feeding on Osedax roots, the lipid rich bone fragments containing the organic remnants of the Osedax ‘roots’ may have been the niche the bone snail was looking for. 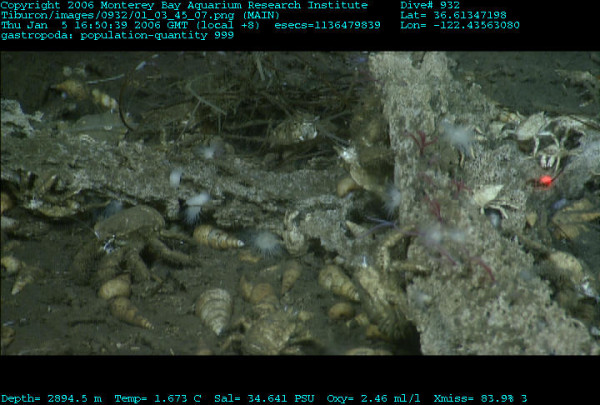 In situ picture of Rubyspira on whale bones, courtesy of S. Johnson/MBARI.

4 Replies to “Move Over Boneworm, the Bone Snail is Taking Over”