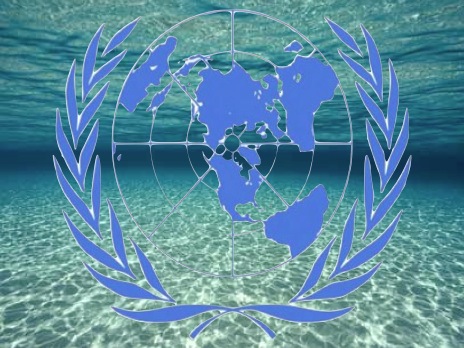 The UN General Assembly’s (UNGA) Second Committee [also known as the Economic and Financial Committee of the full Assembly] recently concluded its 65th session.  To my surprise, the UNGA adopted a resolution on coral reefs during the proceedings.  The Assembly made a few other references to the declining state of global ocean health in a much more substantive resolution on laws of the sea.  While certainly a step in the right direction, the resolutions appear to be heavy on hopeful language and light on commitments.

The first resolution, titled “Protection of Coral Reefs for Sustainable Livelihoods and Development,” was introduced by Australia (pdf available for download in multiple languages), and was adopted without a vote.

In the draft, the UNGA urges States to take all necessary steps to protect coral reefs while taking immediate and concerted global, regional and local action to respond to the challenges of climate change and ocean acidification. It also urges them to adopt and implement comprehensive and integrated approaches for managing and enhancing coral reefs and related ecosystems.

Noticeably absent from any of the language are hard targets, time lines, or anything remotely binding.  But on the heels of COP16 failing to deliver anything tangible with regard to binding agreements on greenhouse gas emissions, I suppose it’s folly to expect anything more than aspirational language.

Peter Thomson, speaking on behalf of Fiji and Pacific Small Island Developing States, welcomed the draft resolution, underlining that climate change and ocean acidification (ostensibly, two issues that directly linked to the COP16 discussions) are the greatest threats to coral reefs and affected most of the Group’s members.

However, Thomson was more critical of States backsliding on recent commitments on curbing ocean bottom trawling and shark finning.  While Parties had agreed that conservation and management of sharks should be enhanced last May, the current fisheries resolution “inexplicably” did not reflect the previously agreed upon language.  Thomson called on nations to respect shark finning agreements reached earlier in 2010.  He was also alarmed that resolutions on ocean bottom fisheries were not being fully implemented, as UN studies had confirmed that bottom trawling had a more negative impact on the seafloor than all other major human activities combined.

The UNGA also drafted language addressing marine biodiversity in general, adopted a resolution highlighting the growing threats to ocean biodiversity.  By a vote of 123 in favor to 1 against (Turkey) with 2 abstentions (Colombia and Venezuela), the Assembly adopted its 38-page omnibus resolution on “Oceans and the Law of the Sea” (A/RES/65/37), reiterating, among other things, the essential need for cooperation, including through capacity-building and transfer of marine technology, to ensure that all States, especially developing countries, small islands and coastal African States, were able to implement the Convention and to benefit from the sustainable development of the oceans and seas, as well as to participate fully in all forums and processes dealing with related legal issues.

The omnibus resolution also highlighted the lack of adequate international action regarding plastic debris found in the open ocean as well as along shorelines.  Again, Fiji’s Peter Thomson made reference to a “great and growing gyre” of indestructible plastic trash accumulating in open ocean and ultimately “choking” shores.

An extract of the resolution on “oceans and the law of the sea” illustrates the general acknowledgment that coral reefs and other ocean habitats are threatened, the reiteration of support around the idea that demonstrative action should be taken by nations, yet ultimately falling frustratingly short of tangible, decisive steps and commitments:

Reiterating its deep concern at the serious adverse impacts on the marine environment and biodiversity, in particular on vulnerable marine ecosystems and their physical and biogenic structure, including coral reefs, cold water habitats, hydrothermal vents and seamounts, of certain human activities,

Expressing concern that climate change continues to increase the severity and incidence of coral bleaching throughout tropical seas and weakens the ability of reefs to withstand ocean acidification, which could have serious and irreversible negative effects on marine organisms, particularly corals, as well as to withstand other pressures, including overfishing and pollution,

129. Notes the work of the Intergovernmental Panel on Climate Change, including its findings on the acidification of oceans, and in this regard encourages States and competent international organizations and other relevant institutions, individually and in cooperation, to urgently pursue further research on ocean acidification, especially programmes of observation and measurement, noting in particular paragraph 4 of decision IX/20 adopted at the ninth meeting of the Conference of the Parties to the Convention on Biological Diversity, held in Bonn, Germany, from 19 to 30 May 2008,53 and the continued work of the Convention on Biological Diversity, and to increase national, regional and international efforts to address levels of ocean acidity and the negative impact of such acidity on vulnerable marine ecosystems, particularly coral reefs;

181. Acknowledges the Micronesia Challenge, the Eastern Tropical Pacific Seascape project, the Caribbean Challenge and the Coral Triangle Initiative, which in particular seek to create and link domestic marine protected areas to better facilitate ecosystem approaches, and reaffirms the need for further international cooperation, coordination and collaboration in support of such initiatives;

183. Encourages States and relevant international institutions to improve efforts to address coral bleaching by, inter alia, improving monitoring to predict and identify bleaching events, supporting and strengthening action taken during such events and improving strategies to manage reefs to support their natural resilience and enhance their ability to withstand other pressures, including ocean acidification;

184. Also encourages States to cooperate, directly or through competent international bodies, in exchanging information in the event of accidents involving vessels on coral reefs and in promoting the development of economic assessment techniques for both restoration and non-use values of coral reef systems;

185. Emphasizes the need to mainstream sustainable coral reef management and integrated watershed management into national development strategies, as well as into the activities of relevant United Nations agencies and programmes, international financial institutions and the donor community.

For more UN proceedings than anyone should have to endure, follow these links for information about the 65th Session of the UN General Assembly or for a complete list of resolutions adopted by the UNGA.