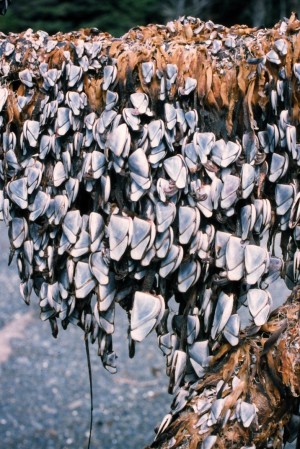 Barnacle evolution was recently rewritten by a large effort of Perez-Losada and colleagues in 2008. Using a combination of genes and morphological traits they rejected some of the ideas that were foundational to barnacle biology and taxonomy, while giving new support for other ideas.

Though Linnaeus and his students described several barnacles, the real authority was none other than Charles Darwin. He spent over 8 years studying, describing in rich detail and monographing every barnacle he could get his hands on from every part of the world. The result was four epic tomes that are still referenced today. Darwin Online has the complete works freely available over the internet: Living Cirripedia Volumes 1 & 2 and Fossil Cirripedia of Great Britain Volumes 1 & 2.

Though he certainly studied whole anatomy, Darwin based much of his taxonomy on characteristics of the shell. The cirripede shell is formed by plates secreted by the cuticle. They are not molted, or shed, like in other arthropods but increase in size circumferentially. The number of shell plates were traditionally hypothesized to increase from an ancestor with 4 or 5 plates during the course of evolution. Other groups in the Thoracica (meaning “little body”) with more plates are thus more derived. It is uncertain to what the selective pressure was to develop different numbers of plates. Perhaps more smaller plates offer greater protection than fewer larger plates. What Perez-Losada et al. found out though was there were no clear patterns with plate enumeration. Clades with no plates are mixed in with clades with 5 plates, while a clade with more than 12 plates is sister to a clade with a last common ancestor that had no more than 7 plates.

The theory of shell plate evolution is clearly debunked in this analysis, though they can say with some degree of certainty that the last common ancestor to the Thoracica had no more than 4 plates. Another interesting point is that asymmetry (Verrucomorpha) has evolved independently at least twice in the thoracican lineage. I believe this highlights the plasticity in biomineral characters, such as shell characteristics. This is seen in many molluscan clades where general shell characteristics are misleading, sometimes due to external parameters (erosion) and sometimes due to phenotypic plasticity in the mechanisms that construct biomineral structures. Thus, the soft parts and larval characteristics are more important (though often more difficult to study and they leave no fossil trace).

On a systematic level they uncovered several polyphyletic clades, such as the Heterlepadomorpha (those that have no shell plates). This clade appears to have evolved at least twice, independently, and in both cases are more derived (within clades that have more than 5 plates) and a more recent radiation. The previously well established clades of the Verrucomorpha (“wart shaped”), Scalpellomorpha (“lancet, of knife, shaped”) and Sessilia (“sedentary” or “without a stalk”) are no more, while the Iblomorpha and Balanomorpha have gained unequivocal support. One grouping that caught my attention is the clade below (magnified from above).

Especially everything under and including the clade marked ‘Verrucomorpha (7s)’. All those barnacles – Neoverruca, Ashinkailepas, Vulcanolepas, Leucolepas and the aforementioned Neolepas are – are hydrothermal vent barnacles from the Pacific Ocean. I am very surprised to see this neat and well supported grouping. In particular, the stalked barnacle Vulcanolepas osheai is known to likely harbor chemoautotrophic bacteria on its cirri. The more vent scientists look, the more it seems that vent organisms tend to form clades despite geographic distance, barriers or classical taxonomic ranks. We are seeing similar grouping in anemones, caridean shrimp, bythograeid crabs, and of course all the chemoautotrophic taxa: siboglinid annelids, bathymodiolin mussels, and vesicomyid clams. The habitat appears to be a unifying factor, though in chemoautotrophic mussels there have been transitions between habitats, and reversals (see Jones et al. 2006).

This is a great study for many reasons, partly because it answers some questions, but mostly because it rearranges our thinking about the taxa in question and gives us more avenues to explore. I didn’t highlight all the major discoveries from this article, such as the fine-tuning of the tempo of evolution, but I hope to see future papers addressing the evolutionary ecology of barnacles in light of the new systematic rearrangement. Taxonomy is at the point now where substantial revolutions need to occur in order to progress from stagnancy. This study and others like it using ‘total evidence’ (i.e. combining morphological characters, life history traits, genetics, etc.) will pave the way to understanding animal evolution and give the field of systematics the credit it deserves, both financially and publicly.

*Next post in this series will examine the evolution of dwarf males.

3 Replies to “Barnacle Evolution I: Phylogeny Served Without Plates”