Another disturbing paper about the BP oil spill was published this week.  The new study from Wood’s Hole researchers shows lingering traces of dispersant in the deepwater oil plume that spread out for 200 miles southwest of the Macondo well head.  The sampling took place over a number of months, showing that Corexit dispersant is slowly diluting and spreading out in Gulf of Mexico waters.

…DOSS [a key ingredient of Corexit dispersants] was sequestered in deepwater hydrocarbon plumes at 1000-1200 m water depth and did not intermingle with surface dispersant applications. Further, its concentration distribution was consistent with conservative transport and dilution at depth and it persisted up to 300 km from the well, 64 days after deepwater dispersant applications ceased. We conclude that DOSS was selectively associated with the oil and gas phases in the deepwater plume, yet underwent negligible, or slow, rates of biodegradation in the affected waters. 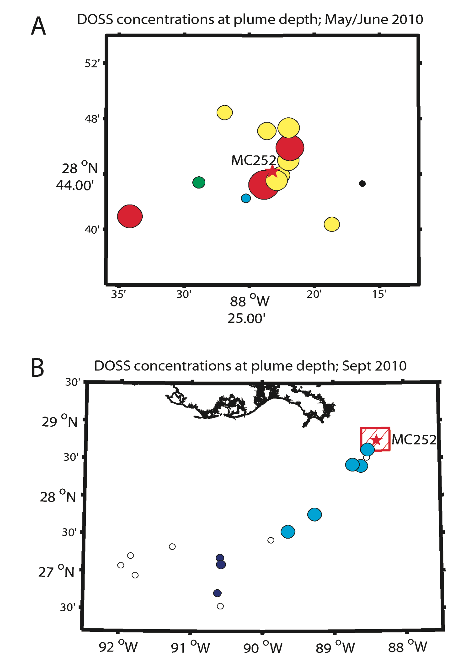 Why do I find this study disturbing?  Well first of all, the main argument in favour of dispersant use was their rapid degradation (public statements by BP and Corexit officials claimed this happened in DAYS).  But nope, dispersants are still there–any sea life swimming though the oil plume faces ongoing exposure to Corexit.  Second, it highlights the complex, ongoing consequences of such a large volume of oil in the Gulf.  A previous study showed that methane in the deepwater plume degraded rapidly.  Now it appears dispersant did not.  Crude oil is made up of hundreds of compounds, and the biological response and subsequent degradation of these compounds is not straightforward. We obviously lack enough scientific information to make long-term predictions–the Gulf of Mexico is a giant guinea pig in an unfortunate natural experiment.