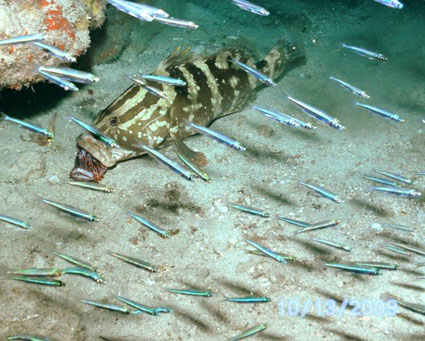 Feed a fish a fish, it eats for a day; Teach a fish to fish, it eats forever. That basically seems to be the crux of a discussion currently playing out on NOAA’s online Coral List after my colleague and pal, Dr Melanie McField, posted the following field observation:

“Last week I had an amazing dive in Roatan during which a Nassau grouper and Mutton snapper closely followed our fearless lionfish hunter–and the Mutton snapper actually ended up eating the lionfish (after it was speared and offered). I think this record will increase the number of species that are confirmed to consume [lionfish].”

“Fish eats fish” is hardly news. What does make this newsworthy is that the fish being eaten is an invasive species, a venomous Red lionfish (Pterois volitans), that heretofore was believed to have no natural predatory controls in its new range.

Below is the video of the diver spearing the lionfish in Honduras (with filming and entertaining post-production by Melanie):

“In the video, you can see a licensed lionfish hunter feed a speared (and dead) lionfish to a Mutton snapper, as an interested Nassau grouper looks on. …The incident occurred about 15 minutes into the dive. The Nassau grouper began following Ian about 5-10 minutes into the dive and the Mutton snapper joined along shortly after. Both fish seemed particularly interested in following Ian and watching the spear keenly. Spearfishing is banned in Honduras, and the fish show no fear of the spear or the divers in general. In response to the lionfish problem authorities are allowing [resource] managers like the Roatan Marine Park to license certain trained individuals to use special lionfish spears to remove lionfish from the reef inside and outside the Roatan marine park. Both fish [grouper, snapper] were approximately 30-40cm length.”

Longtime readers will recall that I’ve been following the spread of lionfish, a venomous fish native to the Indo-Pacific, throughout the Caribbean. While no one is certain how the species was first introduced into the Caribbean, what is startlingly clear is the rate at which the lionfish has expanded into new territory. From initial sightings documented in The Bahamas, the venomous species is now found throughout the Greater Antilles, the entirety of the Mesoamerican Barrier Reef system, and as far as the northern coast of South America.

The explosive expansion of Caribbean lionfish is in part attributable to the super-fecundity of the species.  Lionfish are essentially swimming Xerox machines. NOAA researchers have determined that lionfish reach sexual maturity within two years and spawn multiple times during the spawning season, which may be year round. Each spawn can produce up to 30,000 eggs.  But successful lionfish expansion has also been a function of the lack of predator species in the Caribbean that recognize lionfish as food.

Research by Dr. Mark Hixon of Oregon State University, a scientist at the front lines of this invasion, has already determined that within a short period after the entry of lionfish into an area, the survival of small reef fishes is slashed by about 80 percent. Aside from the rapid and immediate mortality of marine life, the loss of grazing fish will also set the stage for seaweed to potentially overwhelm the coral reefs and disrupt the delicate ecological balance in which they exist.

I called Mark Hixon in Oregon to get his reaction to the report of Caribbean lionfish predation.  In short, Dr. Hixon considers the news, “Fantastic!”  He thinks that we may be approaching a tipping point where native predators begin to regard lionfish as potential prey.  Hixon explained that he has seen cases on Little Cayman of large Nassau groupers, trained by dive operators on the island to accept food from divers, accepting both dead and living juvenile lionfish.  “Nassau groupers are documented to possess the capacity to be trained,” commented Hixon,  “I have seen studies where naive native specimens who do not see lionfish as prey can learn to accept them as food. So there is definitely a possibility to train or condition large predators to see lionfish as prey.”

Training predatory fish like groupers to eat lionfish may involve something as simple as which end of a lionfish to eat first.  The image at the top of this post from Florida Sportsman shows what appears to be a very sad Nassau grouper with the head of an adult lionfish sticking out of its mouth.  “That would be the wrong way to eat a lionfish,” commented Dr Hixon.  As the lionfish’s toxic dorsal fin spines point tailwards.  “I would imagine that grouper will never eat a live lionfish again.”

Mark Hixon thinks divers could potentially habituate a group of what he calls “Teacher Groupers” to recognize lionfish as food. These Teacher Groupers in turn habituate other groupers in lionfish predation.  While Hixon had not heard of cases of Mutten snapper being trained, he was willing to explore possibilities with this species as well. Sort of The Manchurian Candidate meets Finding Nemo.

Not everyone is so quick to jump on the Teacher Grouper bandwagon.  Shortly after Melanie posted her observation on NOAA Coral List, a few concerns were raised.  One in particular cautioned,

“It is not a good idea to feed local fish speared lionfish.  First and foremost, you have no idea if the fish that eats the lionfish is going to catch a barb internally and end up dying from the toxic reaction at a later point.  Secondly, teaching any wild animal to follow spearfishermen to obtain a meal is asking for future trouble (both to humans and for the wild fish that becomes dependent on humans for food).  A much better practice is to remove the spines (with surgical snips) and carry the lionfish  back out of the water.”

All valid points.  But this incident still illustrates the importance of serendipitous field observations in  identifying potential pathways to conservation and the management of biological invasions such as the Caribbean lionfish.  Up till now, natural resource managers in the Caribbean have felt woefully outmatched in attempting to control reef and fisheries damage resulting from invasive lionfish.

“The scientific community still has a lot to learn about lionfish,” said Dr Mark Hixon, “What are their natural controls in the Indo-Pacific? We know their parasite loads are much less in the Caribbean vs their Pacific counterparts, so perhaps the Caribbean parasite community still doesn’t recognize lionfish.  And the much greater fish diversity in the Indo-Pacific may mean there is a greater suite of small fish predators that catch lionfish larvae.”

Plenty of fodder for new research. But aside from all of these ecological considerations, I like Melanie’s story of a native reef species eating an invasive for a wholly other reason as well.  If native Caribbean fish can actually learn to prey upon lionfish, it becomes the quintessential underdog story. A home team comeback tale. I can almost hear the music from Rocky swelling in the background.  There’s a certain poetic justice and satisfaction in the idea that invasive lionfish control could get a boost from some very clever Caribbean natives.