This post was based on a talk I gave for Darwin Day last year at the Duke Marine Lab. Reposting in honor of Darwin Day. Enjoy your day and make sure you take a walk in the woods and enjoy nature’s splendor in honor one of biology’s main men today!
—————————————- 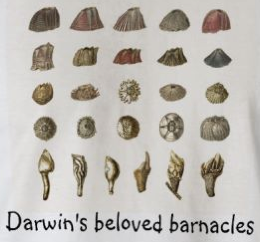 As part of Darwin Day on Friday, I gave a brief talk at Duke Marine Lab during happy hour about Darwin and his beloved barnacles. I was going to post the slides but didn’t think they did the 201 year legacy of Darwin much justice out of the talk’s context so I decided to write up the talk as a post. Happy Darwin Day!

Barnacles held an immense fascination for Darwin. It was through some rather chance events that he ended up being the world’s expert on this fascinating group. He created 4 volumes of masterpieces devoted to all available living and fossil barnacles worldwide. I hope to show that indeed his work with the barnacle did indeed contribute to solidifying his thoughts on transmutation and improving his understanding of what will eventually become his greatest contribution to science. Before we get started though let’s sit back, learn the barnacle basics and set the mood for this post!

Charles Darwin’s grandfather Erasmus (left) was an eccentric physician noted for racey poetry and author of Zoonomia in 1794, a text that presaged the evolutionary works of even Lamarck. Erasmus’ eccentricism appeared to permeate his whole life. Ex omnia conchis – all from shells – was transcribed everywhere according to Rebecca Stott, author of Darwin and the Barnacle. Curiously, the crest of the Darwin-Wedgewood family (right) bears 3 shells. Erasmus’ inspiration must have stemmed from a family history of love for the natural environment. Though Charles Darwin never would have known his grandfather – Erasmus died in 1802, seven years before Charles was born – the family crest and ex omnia conchis surely foreshadowed his legacy.

Darwin started speculating on species during the Beagle voyage, but many of his ideas were solidified after the expedition and after consultation with taxonomic experts. He was very close to publishing his theory of evolution by the 1840s and was keenly aware of the abuse given to Lamarck’s theories. In 1844, Robert Chambers anonymously published a book titled Vestiges of the Natural History of Creation which was written in style and priced for the lay person. It became very popular and laid his own theory for evolution built upon Lamarckian ideas. Vestiges purported a linear chain of transmutation culminating in man, more specifically white English man.

While popular with the laity, the academics and clergy who mentored Charles and whose approval he often sought were up in arms about the book and its rampant attacks against Natural Theology, the prevailing modus operandi in natural history of the time. It was because of the that his friend and confidant botanist John Hooker wrote Darwin after reading a draft of his “big species paper”:

“Do not think I meant to insinuate that you could not be a judge from not having worked out species, for your having collected with judgement is working out species: what I meant I still maintain, that to be able to handle the subject at all, one must have handled hundreds of species with a view to distinguishing them & that over a great part,—or brought from a great many parts,—of the globe.” – Hooker in a letter to Darwin 14 September, 1845

This frightened Charles, as he was not inclined to disappoint or scientifically alienate himself from his beloved colleagues. While it is arguable that Hooker’s letter set back Darwin’s publication of his ideas, it encouraged him to intimately study several larger aspects of morphology that would inevitably aide him in cementing his theory of evolution by natural selection.

Darwin had been working on a problematic barnacle collected during the Beagle voyage since 1835 he  called “Mr. Arthrobalanus” (left, now referred to as a Cryptophialus). He noticed “[t]he thick shell of some of the individuals of the Concholepas Peruviana [sic] is completely drilled by the cavities formed by this animal” (Zoology Notes). In essence, Charles discovered the first burrowing barnacle! A rare find indeed and one that would intoxicate him with crustaceous ecstasy. He intended to describe this small, parasitic barnacle rather quickly, but “was led, for the sake of comparison, to examine the internal parts of as many genera as I could procure.” Beginning in 1846 barnacles would consume his family’s life for the following 8 years resulting in 4 volumes of living and fossil barnacles of all known types around the world during that time. Charles’ son Francis would famously ask of another child, “where does you father do his barnacles?”

It was not until 1830 that it was realized that barnacle were crustaceans. Since they were shelled creatures, naturalists had considered them mollusks akin to mussels and limpets. John Thompson followed the embryology and metamorphosis of barnacles and determined by their developmental characteristics that they were actually closely aligned to the crustaceans. Mollusks weren’t considered a metamorphosing species to Victorian naturalists.

The basic concept that Darwin wrapped around his barnacle synthesis, and even more so later in his Origin, was Richard Owen’s homology, meaning that characters were derived from shared ancestry. Owen was a powerful colleague and former mentor of sort to Charles. Darwin had much respect for him and tried to work within Owen’s archetype framework, which was initially developed with vertebrates in mind. The archetype was a theoretical ancestor, a blueprint in the mind of the ‘creator’. Owen did not necessarily believe it existed but nonetheless thought it was a useful construct from which to understand his homology framework. Darwin, working within the archetype framework for barnacles, was able to systematically classify everything and place Cirripedia correctly as a subclass of the Crustacea, confirming Thompson’s embryological observations.

One of the more interesting challenges to Darwin’s classification of barnacles was the issue of small “complimentary males”, as he called them. Not only did these dwarf males attach to the female, but some species had hermaphrodites with attached dwarf males as well! Because Charles was working within Owen’s homology paradigm, he viewed hermaphroditism as a major character in his barnacle classification and made some interesting, though erroneous, inferences. In his Victorian worldview, Darwin naturally saw the condition of having separate sexes as the most highly evolved, while rampant hermaphroditism must surely be the basal condition. But these curious parasitic dwarf males must be a transitional state between a hermaphroditic ancestor and the more ‘dignified’ separation of sexes.

“These parasites, I now can show, are supplemental males, the male organs in the hermaphrodite being unusually small, though perfect & containing zoosperms: so we have almost a polygamous animal, simple females alone being wanting. I never shd. have made this out, had not my species theory convinced me, that an hermaphrodite species must pass into a bisexual species by insensibly small stages, & here we have it, for the male organs in the hermaphrodite are beginning to fail, & independent males ready formed.” – Letter to J.D. Hooker May 10, 1848

Hooker was absolutely correct in suggesting to Darwin that he become an expert of species prior to speculating on the subject out in the open. His eight years of focused in depth taxonomic study made keenly aware of the variation out in nature. The choice of taxa enabled him to view strange morphology and reproductive strategies that might have been potentially as obvious as it was in the barnacles. More importantly, his approach using homology helped to formulate three central components to his Origin: 1) shared ancestry of parts in related organisms, 2) loss of useless organs (i.e. abdominal segments and swimmerets in barnacles) and 3) transformation in function of homologous organs (i.e. thoracic limbs for walking into cirri for feeding).

Though Charles, like systemacists even today, had difficulty drawing the line between what is and what is not a species he was one of the first taxonomists to recognize the role of variation in studying species. Eight years spent studying variation and homology did indeed make him an expert in the “species question”. It confirmed his transmutationist views, gave him credibility in the face of Vestiges and the much contested views of Lamarck, and resulted in an award from his colleagues at the British Association for his extensive monographic work. These elements were important in securing the “political capital” needed once he was ready to unveil his tome on the origin of species by natural selection.

For more about Darwin and the barnacle years I highly recommend Rebecca Stott’s Darwin and the Barnacle. Darwin’s Study of the Cirripedia by Marsha Richmond was an invaluable resource for preparing for this talk and post.

Richard Grant has some images of Darwin’s Barnacles from the Whipple Museum in Cambridge.