←Previous lesson: Introduction and What Is the Deep Sea? 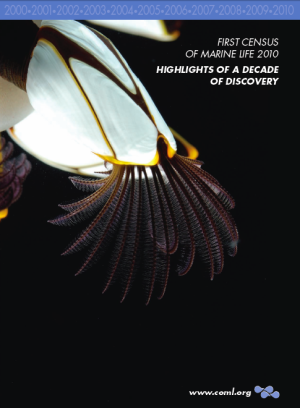 Click image to go to Census of Marine Life!

Last week we kicked off our online class with an introduction to the deep sea environment. Before we continue on to spend a bit of time talking about the history of deep-sea exploration, I want to discuss the current state of marine biology. An exciting and huge initiative to catalog the diversity of our oceans just concluded last Fall called the Census of Marine Life. When we discuss what explorers and scientists were doing in the Victorian era, keep this knowledge in the back of your mind and cross-reference it occasionally. You’ll find that while our methods have remained very similar throughout 200 years, our technology has allowed us to peer further and deeper with each passing year. Part of the key is identifying those areas to explore which will give us the greatest discoveries. You will see very quickly that we are not running out questions to ask or places to explore, despite the success of initiative like the Census, or great explorations like the Challenger expeditions in the late 1800s.

The Census of Marine Life was designed to look at the diversity, abundance and distribution of marine, from the tiniest microbes to the largest whale, at a global scale. In addition to the species information, the Census created an Ocean Biogeographic Information System (OBIS) that everyone – students, policy makers and scientists alike – can use, making this a highly valuable educational and research tool. No other initiative has been so ambitious and while the full success of the Census will be hashed out through the next 10s of years, the current success of the initiative is massive! A quick look at the participants’ statistics is at best an early indicator of what  is to come as the Census wraps up.

Though my part was minuscule compared to the overall scale of the Census, I am proud to have been associated with it for my small part in describing 5 of those species in 2 publications with colleagues from 3 countries. Below is the map of the Census’ project areas. There are 13 regional projects and 4 additional informatics and analysis projects. Most of the oceans were covered, yet so much remains to be discovered.

The initial results from the Census are being published as a collection in the freely available, open access journal PLOS One (a great opportunity for you see how scientists write up results from exploration!). In particular, one of the overview articles by Costello and colleagues describes the current knowledge state of marine biodiversity research. In it they examine the number of specialists per taxonomic group per region (below, left). What is striking is the emphasis on only a few different geographic regions. For instance, we know so little about basic marine ecology of the African continent! This is a new way of looking at our  effort as a community of marine biologists. Some of you may be joining this community and become my colleagues. Think about where the historical efforts have been placed and think very hard about where you might make a contribution.

In the Census’ 2010 Highlights of a Decade of Discovery Report (read it here for yourself!) they highlighted some of the data assembled on new species resulting from the Census efforts between 2000 and 2006 (above, right). In addition to pointing out the bias in geographic region found by Costello and colleagues, the Census Report highlights further a taxonomic bias, from our already limited expert pool, in marine crustaceans and molluscs. Between 2006 and 2010 the number of newly described species nearly doubled, and the Census Report estimates that there are potential up to 6000 new species resulting from the 10 year effort. The most species these appear to be the rare ones, emphasizing the ocean as a hot spot for speciation.

Species discovery wasn’t the only goal of the Census though and there were many basic science questions that were asked about how animals use the ocean, where they travel, how are their abundances distributed, how have human pressure exerted a selective force on fisheries populations, etc. To give you an idea of how enormous an effort this was, nearly 30 million new observations were added to the database greatly expanding our knowledge about animals distributions at a fine-scale, as well as all over the world’s oceans. Below is a Census video that does a very nice job of summarizing the initiative. 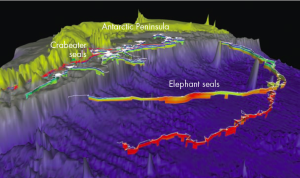 While there are many fantastic results coming out of the Census as we speak, and I could devote multiple lectures to them, I want to just highlight 2 results in particular that I hope you’ll find as fascinating as I do. The first result was obtained by studying how animals utilize their habitat. Researchers tracked Antarctic seals – the crabeater and southern elephant seals – using tags that record the location, time and depth of the seal (read about how to tag an elephant seal!). This data was recently published by Costa and colleagues and showed how these two seal species had very different ecologies (see figure to right). Crabeater seals stayed inshore and rarely dove deep, an average dive depth of 61 meters. On the other hand, elephant seals moved out into pelagic waters to forage and dove much deeper, an average of 345 meters (maximum depth recorded was 2388 meters). Interestingly, despite these huge differences in movement and habitat partitioning, both species maintained similar traveling speeds at 22.2 meters per second. By tracking seals over several years and tracking oceanographic conditions like current direction and speed, Costa and colleagues were able to show how seal movement patterns reflected the local oceanography. In fact, the seals and many other species out there like tuna, seabirds, whales, sharks, and sea turtles have become invaluable animal oceanographers.

The second result I would like to highlight was the thorough characterization of historical ecology of marine fisheries. A team of researchers were assembled which dove through historical records from not just the published literature but fisheries records and any historical observations from the last 1000 years or so to track temporal changes in marine populations. This project, dubbed Historical Marine Animal Populations (HMAP), for instance documented a drastic decline in body size of swordfish caught by harpoon or long line. In 1860 the average weight of a swordfish was 270kg (see graphic on left). By 1930 the fisheries records indicate that the average weight had dropped to near 100kg. A 63% decrease in average weight of swordfish landings over 60 years!

The researchers at HMAP sifted through thousand of records for all landings they could uncover. Over 100 HMAP researchers analyzed marine population data before and after human impacts on the ocean became significant. They documented a wide range of declines in marine animal populations that were commercially important in the past or currently are at the present. Some of these records were not necessarily targeted by the industry but were the result of bycatch in fishing practices, such as sea turtles, or from other non-fisheries sources, such as some coastal birds. This window into past helps understand what steps are needed in the future to better inform people, from fishermen to policy makers to scientists, about how to manage these species . Additionally, understanding the biological and sociological dimensions that brought us to our present enables us to make finer resolution predictions about how any action affects the system as a whole

What I hope you have gained from this small peephole into the Census of Marine Life is an appreciation of where we at now. There is still so much more to know in ocean science. We haven’t even scratched the surface and it is likely we never will. Our understanding of the ocean has proceeded in leaps and bounds, punctuated by pioneering enterprises much like the Census. In our first section we will look at the history of deep-sea exploration and examine how it has rapidly evolved due to leaps and bounds in technology and sampling ability. Our ever-increasingly ability to resolve finer scales in deep-sea science has allowed us to shift paradigms, which enables us to ask new and more interesting questions with a broader reach.

7 Replies to “Deep Sea 101: Lessons from the Census of Marine Life”