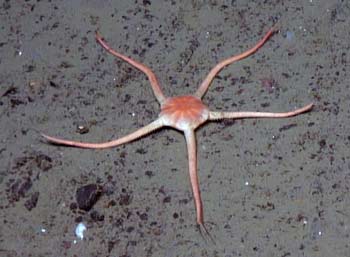 I am really loving the new paper by O’Hara et al.  The gist is we typically think of the different oceans having unique sets of deep-sea organisms.  A Pacific set of animals, an Atlantic set, an Indian set and so on.  But O’Hara and colleagues show instead that brittle stars are differentiated along broad latitudinal bands.  This is very similar to shallow water where gradients in temperature, food, and other environmental attributes vary over latitude.  But in the deep sea we expect these gradients to be nonexistent or be so weak as not to influence organisms.

You can read press coverage with the punny title  Scientists discover deep-sea creatures play in the same band, that I couldn’t resist using for the title fo this post, or better yet visit the orignal paper.

One Reply to “Deep-Sea Creatures Play in the Same Band”