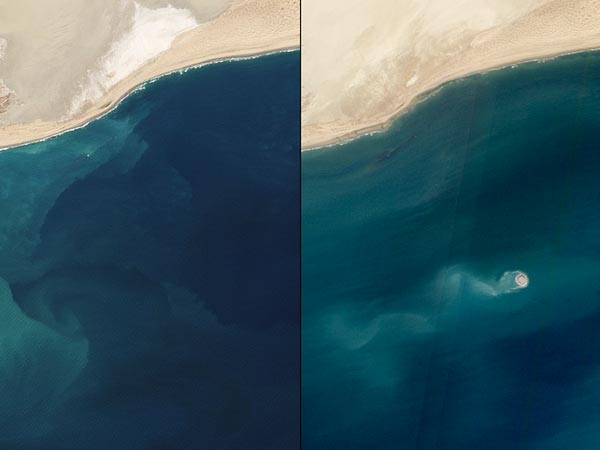 via “Gooey” New Mud Volcano Erupts From Arabian Sea There’s a new island in the azure waters off Pakistan, but you might want to hold off on vacation planning: The tiny dot is a mud volcano that will likely disappear before it sees 1,001 Arabian nights. Pakistani fishers reported the new mud volcano in the Arabian Sea in late November, and NASA’s Earth Observing-1 satellite snapped a picture of it (right) on January 11. The volcano was not in a satellite picture of the same region taken last February.

Mud volcanoes are a type of cold seep, like in the Gulf of Mexico, where gas and fluides mixed with mud create these structures.  New work also indicates that mud volcanos of the Mediterranean Sea by providing a variety of novel habitats increases biodiversity of organisms living in the sediment.  The study finds that species absent in other habitats, although rare, occur on mud volcanoes.