For centuries, mariners sought the Northwest Passage, a route through the Canadian ice that connected the North Atlantic and North Pacific oceans. Today, the Arctic ice has melted so much that the Northwest Passage exists – there’s already multinational wrangling over shipping rights. Why is the Arctic melting so fast? There are a number of reasons, but a new study in Science shows that part of the reason is that the ocean currents are pumping heat from the rest of the world straight into the Arctic.

The oceans have always moved heat around the globe. The classic way of understanding this is called thermohaline circulation, or the “ocean conveyer belt.” Warm currents flow northward in the Atlantic, bringing equatorial heat to the Arctic. The totally awesome but …scientifically challenged… movie The Day After Tomorrow was based on a shutdown of this circulation – no more heat to the temperate regions meant that Jake Gyllenhaal was chased through icy Manhattan by feral wolves with glowing red eyes O NOES!

So if heat has always been transferred to the Arctic, how do we know that more heat is going there now? The researchers in the Science study looked at the shells of microscopic plankton called foraminifera (“forams” to their friends – and you are ALL their friends!), which have very specific real estate preferences. Some forams like cold water and some forams like warm water, and by seeing what forams grow where, scientists can reconstruct the water temperature. The other handy thing about forams is that they have calcium carbonate shells that are often preserved in the ocean bottom sediment, leaving a geological record of the forams from days gone by.

So these scientists took a deep core of the ocean sediments in the Fram Strait, west of Svalbard, and looked at the forams (and the ratios of certain elements in the forms) they found there. This area is important because it’s one of the major flows of warm Atlantic water into the Arctic. The core extended for about the last 2,000 years, so the oldest forams in the core were frolicking about when a rabbi named Yeshua was wandering about saying people should be nice to each other, and the newest forams might have died and fallen to the bottom last month.

The scientists found that this real estate used to be dominated by strictly polar-dwelling forams (blue line, section A) – if Vikings have been phytoplankton ecologists, they wouldn’t have noticed much of a change throughout all of the pillaging. But all of sudden, around 1900, subpolar forams (red line, section A) started to beat out polar forams. This is a sign that warmer water was moving in.

In the last few decades, subpolar forms have totally whupped the polar forams’ microscopic behinds. The orange line in section B shows the percentage of subpolar forams – historically only about 30% of the forams in the area were subpolar, warmer-water species. In recent years this has shot up to 65% – SUBPOLAR DOMINATION. 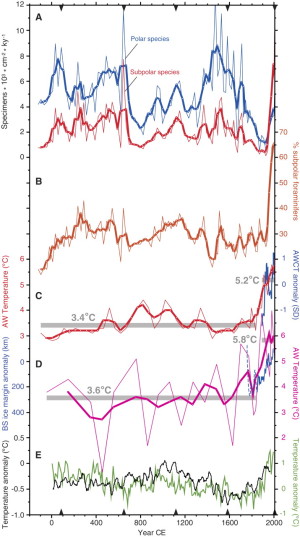 Based on these data, seawater going into the Arctic is the warmest it has ever been in the last 2,000 years. This huge influx of warm water is one reason that the Arctic ice is melting so fast – and why the Northwest Passage has become geopolitical reality. Nothing really takes the romance out of Stan Rogers’ great ballad like realpolitik, but play it once, Stan. For old times’ sake.