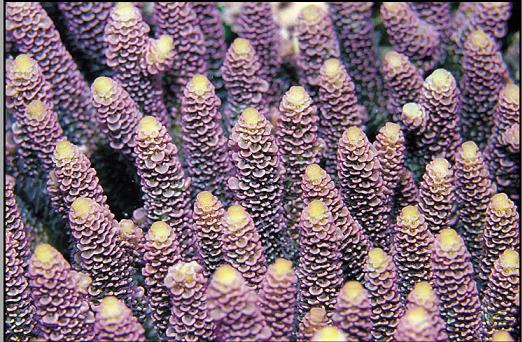 One of the defining decision points of life: Settle-down and make a living close to the familiar particulars of your birthplace or venture out to get a fresh start and be exposed to additional opportunities and experiences that “somewhere else” could open up.

In addition to vexing angsty young adults on One Tree Hill, the decision to be a close-to-home settler or a long-distance drifter also appears to be encrypted in the genotype of some reef-building corals. And conveniently, the difference appears to be color-coded in coral larvae.

A study published last week in the Proceedings of the Royal Society B. by researchers at the University of Texas at Austin indicates that newborn corals that inherit a particular fluorescent pigment exhibit a selective advantage in traveling further from their home reefs over their counterparts which lack this specific pigment. This has important implications in how coastal resource managers can cope with a future, warmer ocean resulting from climate change. The less likely coral larvae are to settle, the more likely they will disperse far from their reef of origin and find more suitable environmental conditions. 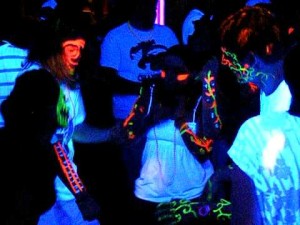 The study focused upon Acropora millepora, a relatively abundant Indo-Pacific stony coral found from Sri Lanka and Thailand to Australia, Tonga, and the Marshall Islands. Adult A. millepora (in the image at the top of this post) are most commonly found in green colonies with orange tips, but can also be bright salmon-pink, blue, green, pale green, bright orange, or pink. A. millepora forms cluster-shaped colonies. Like other stony corals, A. millepora’s visible technicolor hues result from pigments produced by symbiotic algae (dinoflagellates) living within the coral animal tissue. But stony corals can also glow with trippy fluorescing colors of green, red, or blue that are only visible under ultraviolet (UV) wavelengths. Anyone old enough to remember the fuzzy black light posters of the 70’s or techno raves of the 90’s is familiar with fluorescence. [In retrospect, if you remember details from either of these decades, you probably weren’t doing them right.]

Fluorescing proteins (FPs) are responsible for the UV light show on display in adult coral colonies. But coral larvae can also exhibit fluorescent coloration in a variety of color morphs, predominantly bright green and bright red, though the function of this larval fluorescence has been poorly understood. 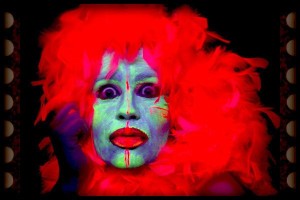 "Shall I immobilize the larvae in 0.04 % paraformaldehyde solution now, Dr. Matz?"

Dr. Mikhail “Misha” Matz, one of the authors of last week’s published study, and his colleagues decided to investigate whether the presence of FPs offer any clues to eventual life histories of adult coral colonies. Their experimental setup was elegant, with overtones of classical Mendelian inheritance studies. Suffice to say, it required some field collecting of specimens and a goodly amount of fiddling with glassware, microscopes, teeny-tiny instruments, and filtered seawater. I suspect it also involved quite a bit of prancing about the lab sporting fluorescent pigment face-paint whilst bathed in ultraviolet light.

After crossing different color morphs of the Acropora millepora, and exposing the larval offspring to an attractive settlement cue of crushed calcareous red algae–essentially catnip to coral larvae–Matz and his colleagues observed that larvae inheriting redder fluorescent color from their parents were less likely to settle and metamorphose into reef-building polyps than greener larvae.

I wrote Professor Matz last week and asked if he might answer a few follow-up questions. He responded withing 20 minutes of my email with added details. In addressing the practical reef management application of his group’s finding:

“Our finding suggests a link between the color of young corals and their likely dispersal range. If borne out in follow-up studies, this connection could help to evaluate, just by looking at the youngsters’ color in nature, how much a particular reef depends on larvae arriving from other places, versus how well it is able to reseed itself. This has obvious implication for conservation planning (for example, reefs that have lots of immigration would be able to recover faster after disturbances than the predominantly self-seeding reefs, and hence might be better bets for protective measures).”

Prof. Matz doesn’t think the infrastructure necessary in the field for coral reef resource managers to rapidly assay coral spawn as settlers or drifters is prohibitive. Nothing more sophisticated than a flash digital camera capable of macro-photography and some light filters. But before we start placing any camera orders, Prof. Matz has more basic research he’s like to conduct,

“First we must verify that the color-dispersal range connection holds (i) in nature; and (ii) at the individual level. We will hopefully be able to do all the necessary experiments this year.”

And while he and his colleagues definitely sees co-inheritance of fluorescence color and settlement success, the question remains as to why they are co-inherited,

“I expect a functional link (red fluorescence might be participating in sensory functions of the larvae), but it is also possible, at least theoretically, that the “gene for settlement ” and “gene for color” just happen to be next to each other in the genome. Whatever the cause of the co-inheritance, it is definitely real.”

In the case of corals, deciphering these genetic signals involved in settlement of new coral reefs isn’t just an academic puzzle, but potentially the key to seeing reefs through the biggest challenge to their ongoing survival.