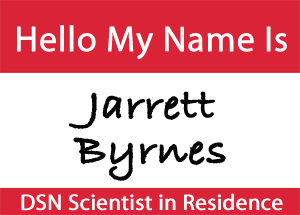 February’s Scientist In Residence that I am way behind on introducing is Jarrett Byrnes, a postdoctoral fellow at the National Center for Ecological Analysis and Synthesis (NCEAS).  I have a lot of respect for Jarrett for not only his mad blogging skills at the cleverly name i’m a chordata! urochordata! but for his impressive research and publication record. His work has fundamentally contributed to our understanding of how anthropogenic impacts alter ecological interactions and marine biodiversity. With impressive credentials like this, how could we not have him at DSN. 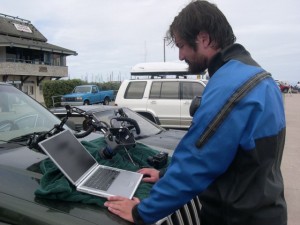 Hello hello DSN crowd! It’s my pleasure to be here and give you a flavor of my science. For those of you who are familiar with me, don’t worry, I won’t fire any R code at you in these posts. Unless, you know, you all are secretly into that.

When I was first sat down as a young theater-majoring undergraduate and asked by a stern yet mischievous professor, “So, why exactly are you interested in marine biology?”, I bungled the answer madly. “Um, well, I’ve been diving since I was twelve, and I always just wanted to know, um, you know, how and why different invertebrates live together and interact- how it all fits together, um, as a whole. They’re just really cool.”

Way smooth, I know. Smoove A I am not.

What I didn’t know at the time was that I was defining myself as a marine community ecologist. In particular, I betrayed my bias as someone interested in taking a big-frame holistic picture of nature. And so I was sent to work in a lab (populated by some sketchy characters) and begin my journey into Science! As I grew up, as it were, two observations hit me over the head time and time again.

(1)Man is driving species extinct at an incredibly rapid rate. (2) At the same time, the rate of species invasions is at an all time high – particularly in the sea. What will this mean for the future of our oceans?

I began by asking how have the richness and shape of coastal ocean food webs changed over time. By way of review, a food web is a simple way of thinking about the relationships between predators and their prey in an ecosystem. They can be an absolute tangled mess of reticulate feeding relationships between species.

One way to simplify webs is to break species up into separate levels such as algae & phytoplankton as primary producers, urchins & zooplankton as herbivores, sea stars & small fish as primary predators, and so on. In general we think of diversity being higher down at the bottom of a food web, and lower at the top – a pyramid, if you will.

But are extinctions and invasions reshaping these food webs? Or, are they counteracting each other so that the identity of the players changes while the shape of food webs stays the same? I answered this question by looking at one of the only published lists of extinctions in the oceans at both a global and local scale. I then compared the distribution of species extinctions among feeding groups to and records of marine species invasions from the Gulf of the Farallones, San Francisco Bay, Australia, and the Wadden Sea.

In general, the species that go extinct in the oceans are at the top of food webs. We’re losing predators. And invaders tend to be smack dab in the middle – filter feeders like ascidians or deposit feeders down in the mud.

What does this mean for the shape of webs? Well, it appears that the food webs of oceans are transitioning from the classic pyramid shape to something more like a squat little box. From the data I used, I had area with records of both extinctions and invasions – the Wadden Sea. The food web still hasn’t achieved box-like status, but it’s on its way. 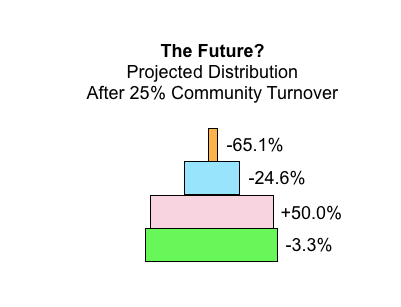 How extinctions and invasions have reshaped the distribution of species in the food web of the Wadden Sea. The colors correspond to the food web schematic above.

At this point, the question you should be asking yourself is “So what?” Indeed, we’re changing the shape of food webs – ok, ho hum, what does this matter? How could this change the way the oceans function other than redistributing species here and there?

Well that is a story for my next entry!

5 Replies to “Scientist In Residence Jarrett Brynes: How Are Extinctions and Invasions Shaping Food Webs?”