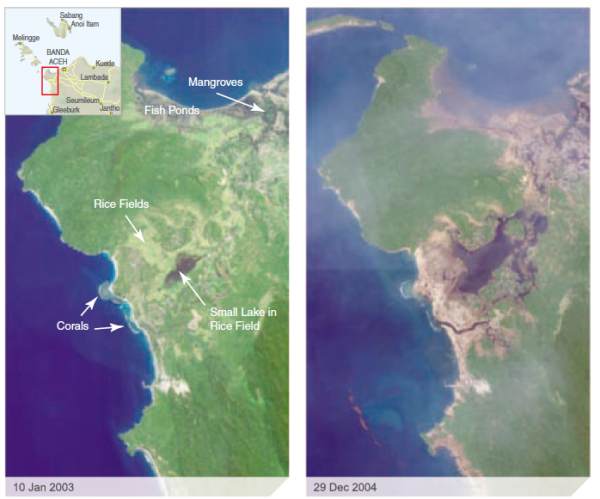 Figure from UNEP: These images show a combination of a rocky, hilly headland along with a small river delta and swampy coastal strip. A low-lying wetland area connects the northern and western ocean fronts. An integration of natural and agricultural ecosystems operating prior to the tsunami combined rice cultivation, and fish/shrimp ponds, alongside natural delta mangrove forests and wetlands. Coastal forests and onshore reefs are also present. The effect of the tsunami is clearly evident. It scoured out the low lying delta land, destroyed fish ponds and removed mangrove cover. Volumes of soil and silt have evidently been carried out to sea expanding the area of the small lake by a factor of approximately 10. There has been removal of the sandy beaches (important in some locations for turtle nesting) and deposition of silt or mud on the reef. Apparently minor effects on the integrity of the rocky vegetated shoreline surrounding the headland are likely due to the resilient nature of the substrata, as well as dense natural vegetation cover and the sloping nature of the shore.

On December 26th 2004, a 9.0 earthquake struck off northern Sumatra in Indonesia.  This triggered a massive tsunami that affected Indonesia, India, Malaysia, Maldives, Sri Lanka, Thailand, and Africa. What was the lasting environmental impact of the tsunami and what might we expect from the recent Honshu Tsunami?

The environmental impacts of tsunami can be broken down in to sixt major categories. Examples are given from the 2004 tsunami.

Although macabre, wildlife may fare better after a tsunami if the human population is greatly reduced.  This is particularly true of fisheries.

More than 13,000 fishermen were killed and another 5,000 evacuated in Sri Lanka alone, with 80% of the fishing fleet lost or severely damaged. On the Thai coast, according to the UN Food and Agriculture Organization, 4,500 fishing vessels were smashed, jeopardizing the livelihoods of 120,000 people in fishing villages there.

UPDATE: Jason Goldman has a nice write up about the some of the early environmental impacts from the Honshu Tsunami at Scientific American.

M. Sanjayan of The Nature Conservancy in Arlington, Virginia, told ScienceInsiderthat the biggest impact on wildlife would be on shorebirds nesting on small islands throughout the Pacific, rather than on the Japanese mainland. Indeed, the majority of wildlife-related news of the tsunami has come from small Pacific islands such as those in the Midway Atoll National Wildlife Refuge…The US Fish and Wildlife Service is nowestimating that the Midway Atoll National Wildlife Refuge sustained losses of that more than 110,000 Laysan Albatross chicks – representing approximately 22% of chicks born this year – along with an estimated two thousand adults. In addition, thosands of Bonin petrels were buried alive, and thousands of fish were washed ashore where they suffocated on Eastern Island.

One Reply to “From the Editor’s Desk: The Environmental Impacts of Tsunamis”