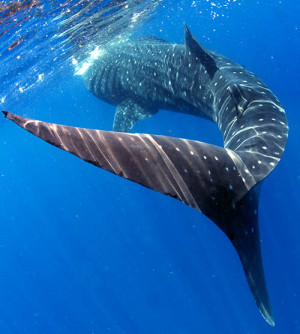 Hi there DSN readers, nice to meet ya.  I want to introduce you to a friend of mine.  He’s a little on the big side, but as gentle as they come, unless you happen to be a krill, in which case he. is. the. Holocaust.  It’s the whale shark of which I speak.  Rhincodon typus is the largest of all 28,000 species of fishes and one of the most enigmatic and unique species in the ocean: a circum-tropical, filter-feeding shark the size of school bus, spotted white on black like a negative Dalmatian.  I’ve been lucky enough to work quite a bit with this species in the last few years, so what I thought I’d do for my first DSN sortie is give you a little insight into what we’ve learned about the lives of whale sharks in recent times because, despite their unmatched size among fishes, they’ve only come to research prominence in the last 15 years or so.

The story starts with the birth of a baby whale shark in the warm waters of, um, … oh wait, we don’t know where they’re born because it’s never been observed.  Hmmm, that’s a bit inconvenient for our story.  Well, at least I can say that we think that they are live-bearers.  Precisely one paper describes the embryology of whale sharks, and it reports 300 embryos (!) in the uterus of a large female who was caught and dissected, then prosaically referred to as a “mega-mama supreme” in the title of the paper (!).  Problem is there’s a contradictory report of a whale shark egg being trawled up from the bottom of the Gulf of Mexico.  So which is it?  My money’s on live birth, but boy it sure would be nice to see it happen and document how and where.

OK, so we don’t know where/how they’re born, let’s skip forward a bit and meet up with our young whale shark, now 5 feet long, and swimming in the warm waters of, um, … oh wait, we don’t know where they go until they’re about 15 feet long.  This  is getting awkward.  How is it possible that we don’t know where the largest fish in the ocean goes for the first year or two of life?  Well, it’s a big ocean I guess, and the answer is probably tied to the first question of where they are born.  There are a couple of videos kicking around that show baby whale sharks seen around the Philippines, so I wouldn’t be surprised if the Pacific population is born and spends the first year or so of life around the state of Sorsogon.  As for the Atlantic population, adults show up reliably in places like Honduras, Belize, Mexico, the Gulf of Mexico and West Africa, but I’m not aware of any reports of consistent sightings of small whale sharks, so boy, it sure would be nice to see some little ones.

Let’s consider the adults then.  Finally, some solid data!  The natural history of adult whale sharks has been something of boom area of research in the last 15 years or so.  This has come about because of two main events.  First, scientists have realised that whale sharks are not solitary open-ocean behemoths, but that they come quite close to shore and can and do form large aggregations with some regularity.  As a result, some places have reached near mythic status among shark scientists and ecotourists alike: Ningaloo in Western Australia, Donsol in the Philippines, Gladden Spit in Belize, Utila in Honduras, The Maldives, and Isla Holbox in Mexico.  These areas all have something in common: they are areas of intense productivity.  The sharks are not attracted to each other per se, but to an abundant food source that typically comes from upwelling that sponsors a lot of plankton, or from mass spawning of some other species.  In other words, whale shark aggregations are sort of a side effect and not an end in themselves.  The second event is the advent of satellite tagging technology, which meant that scientists have been able to overcome the hurdle of following such large and mobile animals to find out where they go when they leave a given aggregation.  They just affix a datalogging tag and let the animal on its way; at some later but predetermined date the tag pops off and reports the details of the journey back via satellite to the lab.  I say “just” but actually there’s a fair bit of work involved and the tags themselves are a technological marvel (perhaps another blog post).  When scientists put these two things together (tagging animals at aggregations and then following them), the picture that emerges from the data is that of a highly mobile species whose life history strategy is to travel from one hot-spot of productivity to another, often traversing vast spans of largely barren ocean in between.  This sort of strategy is only possible if you are big enough to survive long migrations because of huge energy reserves and efficient swimming.

What has not yet emerged from tagging studies is where and when whale sharks mate.  Yep, we’re back to that again – another major life history event in the world’s largest fish that remains a complete mystery!  Wherever it happens, whale shark “bow chicka wow-wow” must be quite a sight.  Typically sharks cannot swim while they are copulating.  So, can you just imagine a combined 70ft of whale shark either sinking into the depths of the ocean or perhaps even resting on the bottom as mating takes place?  At the risk of sounding slightly voyeuristic, boy, it sure would be cool to see and document that. 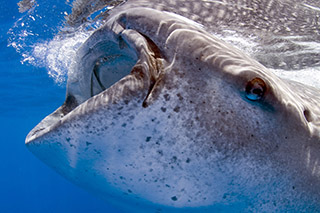 On a Winning! note (thanks for getting that into the lexicon, Charlie), we have learned quite a bit recently about what and how whale sharks eat and I’m pleased to have been part of that work.  Learning about whale shark feeding is important because their filter-feeding mode is unique among sharks, even differing from the other filter-feeding shark, the basking shark Cetorhinus maximus.  Both species feed low on the food chain, scientists would say “at a low trophic level”, but there the similarity ends.  Thanks to studies of whale sharks in Mexico and at the Georgia Aquarium, we know that they feed by cross-flow filtration across 20 remarkable black filter pads that line their enormous maw.  This cross-flow approach, where water flows largely parallel to the filter and not perpendicular to it, is an exceptional and extremely efficient way of separating particulate food from the water that flows into their mouth, without clogging their filter pads.  We’ve learned that they have different ways of applying this adaptation depending on exactly how dense the food is, such as surface active filtering, sub-surface ram-filtering and (when food is really dense), vertical suction feeding.  We know they have a diverse diet of zooplankton, krill, sergestid shrimp, gelatinous plankton (comb jellies, salps etc.), eggs of various mass spawners like snapper and tuna, and even small whole fish like anchovies, and that their strategy is really one of “feast and famine”: find a dense patch of food, eat until it’s no longer worth doing so, and then move on to the next patch.  It’s really a giant energetics game and one that they are clearly very good at, since they’ve been around for millions of years.

To finish out the life-history story then, let’s consider how big and old whale sharks get at the end of their life.  Doh!  We don’t know that with any scientific certainty, either.  There are reports of whale sharks 65 ft in length, but it’s impossible to verify the accuracy of these sorts of reports because  they were not independently/scientifically confirmed and getting an accurate measurement is surprisingly difficult, especially in a live, free-swimming animal.  I can tell you that having seen hundreds of whale sharks, I have never seen one that would have been over forty feet.  I base this on comparison with tape measurements of 20-25ft animals in the aquarium and of laser-caliper measurements in the field.  That might just mean that there are no really big ones left in the Atlantic population that I know, but it seems more likely that the really big ones are just exceptionally rare but, paradoxically, over-reported.  I mean, who’s going to bother reporting an average whale shark?  No, you only speak up if it’s a true whopper, so looking back, we see a litany of huge animals in the record, and develop a distorted idea about the species’ size range.  Let’s assume they do get to 60+ft, how old might such an animal be?  Again, we don’t really know because aging them is harder than in bony fish and hasn’t been attempted for big ones either.  Some modeling work from Bob Hueter’s group at Mote suggests maybe 75 years for the really big ones, but these models really need to be verified against more field data, and that’s yet another basic natural history study that’s yet to be done before we can really say we’ve wrapped our brains around the life cycle of the world’s largest fish.

Epilogue.  In future posts I’ll almost certainly revisit whale sharks with some frequency – they’re just so damn interesting!  One of the really cool things about working with this species is that we’re doing the sort of basic biology that I’ve talked about in this post using animals in the field and, at the same time, we’re doing really cutting edge stuff with aquarium animals.  It’s a tremendously exciting time to study this incredible species and I look forward to sharing that research with you as it comes to hand, including live-blogging some field work planned for this summer in Mexico.  BUT – if whale sharks aren’t your cup of tea, don’t worry, my blogging tastes are as eclectic as many of the other DSN bloggers; I’m jazzed by just about anything that swims, wriggles, glides, or oozes through the oceans, rivers or lakes of the world, or in aquariums for that matter.   My deepest thanks to the DSN team for allowing me to join in the fun.  I better get cracking on learning some sea shanty tunes to fit in around here. Otherwise, I have a sneaky feeling I might just fall victim to a particularly medieval bout of newbie-hazing.

6 Replies to “What’s black and white and studied all over?”