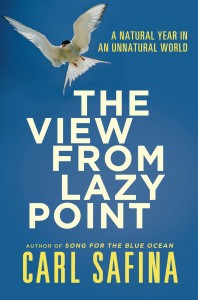 If I ever write a popular environmental book, I am going to call it “I Hate Thoreau’s Bastard Children: Why Modern Environmental Writing Sucks.” The pernicious influence of Transcendentalism lingers like a poison oak rash every time someone gets an urge to write about nature. I’ve occasionally thought of making a drinking game as the only way to get through the viscous stew of self-consciously elegiac lyrical inanity that makes up the vast majority of middlebrow environmental writing. Description of writer’s idyllic childhood in nature? Drink! Description of previously teeming life now grown sparse? Drink! (Do two shots if passenger pigeons or buffalo are mentioned). Token interview with charismatic fisherman/indigenous person just trying to get by in a changing world? Drink! Despite a liver hardened by years of marine biology, I just can’t drink that much before bed.

So I don’t read popular environmental books if I can possibly avoid it. But I decided to read and review Carl Safina’s latest book, The View from Lazy Point: A Natural Year in an Unnatural World out of pure homesickness. I hadn’t read any Safina before, but when I saw that his book took place on the eastern tip of Long Island (just a bit south of my home waters in the Gulf of Maine), I desperately longed to feel the pulse of the seasons, however vicariously. The poor publicist who sent me the book had no idea what he was in for – my dislike for modern Transcendentalism plus my homesickness is a recipe for severe crankiness.

Safina does indeed devote large sections of the The View from Lazy Point to the Environmental Studies 101 fluff I was expecting. Standard-issue Thoreau and Aldo Leopold quotes abound, along with a lot of preaching to the choir – a reader who is interested in 300 pages on the wildlife of Long Island Sound is unlikely to have an Safina-inspired epiphany about the evils of corporate oligarchy or the wastefulness of mindless consumerism. And Safina frequently falls into an overwrought pit of despair, especially with his rhetorical questions. (One example: When contemplating the vanished salmon runs of the US North Atlantic, he asks “But what memory has recorded that; where in the rocks is it written?” All I could think was “Um, maybe you could read the history with sediment cores? Does that count as rock?”)

To my surprise and delight, I also loved parts of the book. Safina is at his very best when bringing his science background to bear on his love of nature. I especially enjoyed his explanations of energy flow, such as the forests of Alaska built on generations of bear-flung salmon carcasses or the Caribbean beaches built on centuries of parrotfish poop. I think the very best section of the book is the part on the complex and non-intuitive relationship of terns, bluefish, climate, and habitat. Safina skillfully interweaves the terns’ natural history with his own work and observations, and at the end perfectly captures some of my feelings towards science.

So to me, terns and Bluefish always seem like old friends coming home. Few people realize it, but the most satisfying part of science is the intimacy.

Many of Safina’s old friends – bufflehead ducks, horseshoe crabs, rampaging bluefish  – are my old friends too, and I was enraptured by the march of the seasons at Lazy Point.

I also like Safina when he’s being forthright and cranky, channeling Edward Abbey instead of William Wordsworth. Safina isn’t a holier-than-thou type – he occasionally struggles with his own rules, such as his desire to conquer a huge mako shark. He’s also not afraid to take on animal rights activists (“…seemingly unconscious of the big picture”), Alaskan anti-government people (“whining, selfish hypocrites”), or duck hunters that throw away their kills (“phonies [that]…act out a ritual that once had meaning but has been hollowed out by changing times and their own hollow heads.”)

But what spoke to me most in The View from Lazy Point was Safina’s love for his surroundings, despite their altered and often depressing condition. He refuses to turn his back on nature, even though we have reduced so many things to shadows and ghosts of their former selves.

Even with so fine a start to today, imperfections are evident. I know this, though: this morning, full of such rich, deep, savage beauty, where predators and their prey perform their rituals as they always have, indicates that there remain on Earth some remnants of a long-lasting world, some yardstick.

The View from Lazy Point is a loving window into this long-lasting world, interwoven with an introduction to major environmental problems and a very general overview of the economic and social forces that cause them. While it could be used as an introduction to modern environmental issues, I think it is most suited for northeasterners trying to connect with the natural world around them. After all, the glories that Safina describes are just a short train or car ride away for more than 30 million people. If more of these people get outside and tell their representatives that they care about conservation, maybe there will be less of a need for elegies.

Ooops, did I just end this review with a nonspecific call to action? Drink!

For another take on The View from Lazy Point see Andrew’s review at Southern Fried Science.