One year ago today, all hell broke loose in the Gulf.   From scientists’ perspective, last year’s massive oil spill only just unlocked gates of Hades; the full fury and environmental wrath of this catastrophe will besiege the Gulf for years to come.  I’m not going to give you a round up of all the news stories released in lieu of the anniversary (although I will point you to a laudable tome of articles at the New York Times, NPR’s story on Seafood Safety, The Takeaway’s round up of Impacts, and Scientific American’s narrative about the role of science in containing the disaster).  Google News is giving me 5666 stories for ‘gulf oil spill’, and its still morning.

I will tell you that science is still suffering.  We still have very little available data to assess the effects of the spill.  Publications are appearing (slowly), but many important results are currently embargoed (because of litigation and the government’s NRDA process) or unpublished and thus scattered across many labs.  Because I’m not seeing the publications, I still don’t really know who is doing what at the moment.  I could find out if I really needed to, but this would involve many hours, possibly days, of trawling the internet and oil spill database resources to read up on various projects.  I have over 4 million DNA sequences from the Gulf, so data analysis kind of needs to take priority nowadays (although that gives me an idea for an undergrad project this summer—prepping a Vogue-esque slideshow of who’s who and who’s doing what in oil spill research).

Then there’s the funding. Our NSF RAPID grant was only funded for an initial 1-year period.  That means we run out of money in August, despite having accumulated over 200 pre and post-spill samples that are nowhere near fully analysed (or extracted…or sequenced…).  BP’s $500 million pot for scientific research is still sitting idle.  They have a nice little website detailing the Gulf Reseach Initiative, but no Request for Proposals have been released.  This is despite the following information in the FAQ section:

Q: How soon will the funding be distributed?
A: For Program Year 1, a series of fast-track grants were made by BP to accelerate data acquisition and analysis: Louisiana State University ($5 million), the Northern Gulf Institute ($10 million), the Florida Institute of Oceanography ($10 million), the Alabama Marine Environmental Sciences Consortium ($5 million) and the National Institutes of Health ($10m). For Program Year 2, a Request for Proposal is expected to be released in early 2011, for anticipated awards by June 2011.

It is nearly May.  Halfway into 2011. If we don’t even have a call for proposals by now, there is no way there will be funding awarded by June…or probably even by the time all the NSF RAPID grants start expiring this summer.  Competition for funds is always fierce at NSF (something like a 5% success rate), so Gulf proposals directed towards such government agencies will be up against a lot of really good science.  Some critical oil spill research will certainly lose out.  We need a dedicated body (coughcoughGRIcoughcough) to take the reigns on these RAPID projects and ensure long-term monitoring of the Gulf.

Last autumn’s conferences and meetings were fantastic for learning about the myriad of ongoing projects in the Gulf –I also forged many new (and still ongoing) collaborations with other researchers at these events.  And of course, begging for samples in person has really paid off.  Meetings keep popping up everywhere, but there is no money to get there.  My own travel funds only stretch so far, and our small pot of RAPID money is (and always was) wholly devoted to sequencing costs.  You’d think that, if researchers have FUNDING to work on Gulf oil spill projects, there would be SOME sort of money put towards facilitating ongoing interactions and discussions.   The overarching theme of previous meetings was to NOT replicate efforts—but we can’t guarantee non-overlap unless we keep the dialogue going and coordinate across disparate labs?!

I will also tell you about an amazing book released this week.  I was lucky enough to get an advance copy of Carl Safina’s new book, A Sea in Flames.  Now, I barely have time for sleeping, nevermind reading for fun, but I was seriously addicted to this book.  The writing is impeccable and fast-paced, with an ominously urgent tone.  Safina’s emotions—his anger, confusion, and desperate search for information when chaos reigned—mirrored my own feelings as I watched events unfold last year.  I really couldn’t put it down and finished it in two days; it’s a must-read for anyone who wants a deeper look into the timeline of the spill. 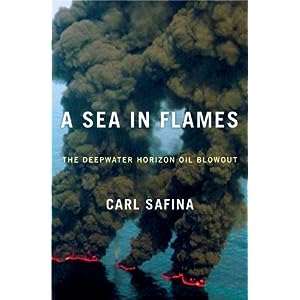