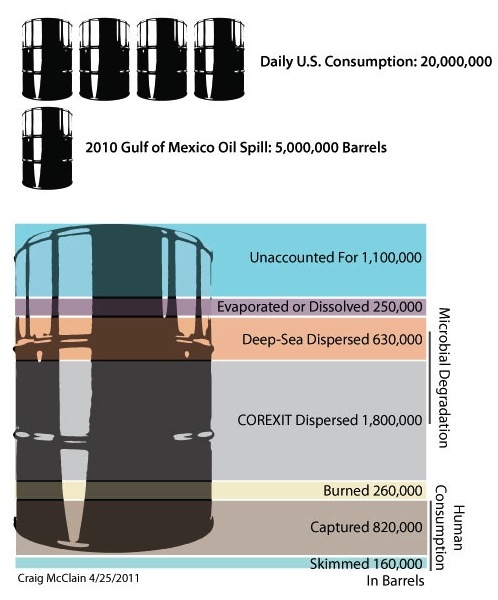 Skimmed: Oil skimmed off surface. Captured: Oil captured before escaping into the sea. Burned: 400 burning of concentrated slicks moving barrels from water to air. COREXIT Dispersed: Oil "dispersed" by 1.8 million gallos of COREXIT. Deep-Sea Dispersed: Oil "dispersed" at 1500 meteres through a narrow pipe. Evaporated or Dissolved: Oil that disolved in to Gulf of Mexico or evaporated into the air. Data are from here, here, and here. This image is covered under Attribution-NonCommercial ShareAlike CC BY-NC-SA http://creativecommons.org/licenses/by-nc-sa/3.0/

I’m tired of hearing people say the oil spill isn’t is bad as it could been or we thought it would be.

“A lot of questions remain, but where we are now is ahead of where people thought we’d be,” Safina says. “Most people expected it would be much worse.” -Carl Safina

Let’s not forget those who said we were saved because of microbial degradation.  Let’s all drink a beer for the microbes!

A top scientist studying the ability of bacteria to break down the oil plume in the Gulf of Mexicosays that microbes have been so successful that the oil may be gone.

So a year later I’m still pissed and am not so ready to say the Gulf is fine.

4 Replies to “Pardon Me If I Don’t Start Celebrating”