My life for the past few months has been all about sharks.  Mind you, I’m not complaining.  A confluence of opportunities has me building new shark-focused conservation components into some long standing work in three international project sites (more on one of these sites later).  Shark conservation and coral reef conservation are the peanut butter and chocolate of marine conservation… two much needed causes that work great together.

But just when I think we may be rounding the curve on public perception of the importance of sharks, I’m reminded of how far we still have to go.

In February of this year, a Canadian woman vacationing in Cancun, Mexico, was bitten on the leg and arm while swimming just offshore from a resort hotel in Cancun’s Hotel Zone.  While some news agencies erroneously reported the woman lost her arm, the woman survived with all limbs attached despite blood loss and trauma to her thigh, foot, and arm from the bites (click here for a particularly graphic image of the extent of trauma to her leg). It is presumed that the shark species responsible was a Bull shark (Carcharhinus leucas), a species known to congregate along the Mexican Yucatan coast each winter to reproduce.

In Late March, a Russian woman received a 20 cm bite on her leg after allegedly disregarding lifeguard warnings to stay out of the water after sharks were sighted in the surf in front of another Cancun resort hotel.  Various reports have circulated indicating that despite warnings the woman returned to the water  in an attempt to capture a photo of the shark.  A Cancun local I spoke to about the incident  while in Mexico said that the woman may have gotten caught between the shark and a lifeguard JetSki being used to “herd” the shark away from the shore.  Culpability aside, media latched on to this latest “attack” and Cancun, a global tourism destination, was under scrutiny to take proactive steps to combat this “wave of shark attacks.”

Cue scenes of local politicians meeting behind closed doors followed by fishermen–armed with fishing poles, guns, dynamite, harpoons, and buckets of chum–overloading small boats with a mandate to catch this “killer sharks.”  Okay, I’m making up the harpoons and dynamite part.  But all that was apparently missing was a soundtrack by John Williams.

The result?  The following grisly images trickled across my desk last week: 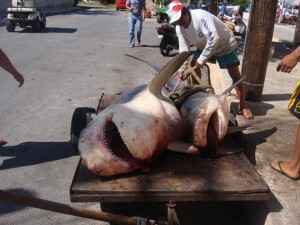 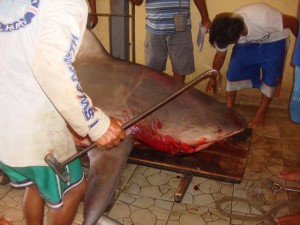 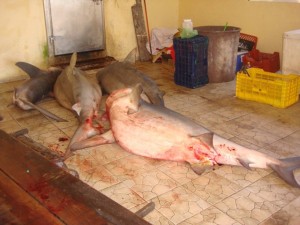 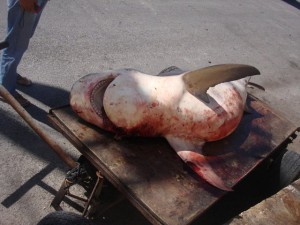 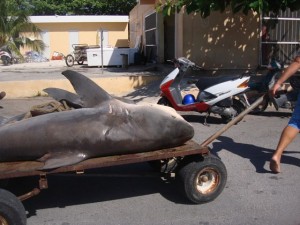 I received an email accompanying the images that reported the following:

…48 hours after the latest shark attack became news, in Puerto Juarez [a small port just north of the Cancun Hotel zone], fishermen received an encouraging “go ahead” to basically go out and kill sharks…  In only a few hours, a small fleet of fishermen from Cancun went up and down the coast and in this one outing it turned into a mass slaughter of sharks. By night, 19 hours later, in secrecy, in the Juarez port, they laid out 70 shark corpses, some of them females who were pregnant. The sharks had an average size of 2 meters, although some bigger ones were about 3 meters.

Was this the only solution?

Do the authorities involved in this matter deserve an applause for their quick response to fix this problem?

I don’t have any answers to these questions.  But I certainly plan to investigate what Mexican resource management authorities, the Comisión Nacional de Áreas Naturales Protegidas (CONANP), the Secretaria de Medio Ambiente y Recursos Naturales (SEMARNAT), or the Procuraduría Federal de Protección al Ambiente, (PROFEPA) knew about this activity and what they plan to do to safeguard Mexico’s shark species in the future.

Tip of the hat to Mike Neumann for improving my terrible Spanish translation of cartoon.

4 Replies to “Sharks, The News Cycle, And The Madness of Mobs”