In honour of a current visit to the ancestral homeland (Australia), I thought I’d share some fish species Aussies (from the southern states at least) are familiar with, but others may not know.  Not too much science here, but I thought it might be interesting for fisher folk and ichthyology-bods alike. 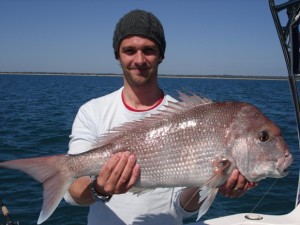 Snapper – Pagrus auratus.  Not a snapper in the US sense, where the word means “Lutjanidae”, this is actually a member of the Sparidae so it’s closer to pinfish, porgies and scup.  As you can see it gets pretty hefty as porgies go and is a lovely pink shade with metallic blue spots on the flanks.  Great fight and superb white flesh.  As they get bigger, the devlop a pronounced bump on the “forehead” and sometimes the top lip.

Blackfish or luderick, Girella tricuspidata.  This is what Americans would call a chub, or a member of family Kyphosidae.  This is one of the few coastal marine fish that is often caught on vegetarian baits (loves the sea lettuce or Ulva).  Small mouthed, it’s a wily opponent in surf-washed rocky intertidal zones.  Not my idea of the best tasting fish, but some folks dig it.  It’s called parore in New Zealand, y’know, on those few occasions when kiwi’s are not paying uncomfortable attention to sheep. (Australia and NZ – it’s like a USA-Canada thing).

Dusky Flathead, Platycephalus fuscus.  One of my favourite fish in Australia, this species doesn’t really have an equivalent in the US.  Its sort of a super-athletic stargazer. A classic ambush predator, they like to lie buried in sand just off the edges of sand flats and nail mullet and other small fish that drift off on the falling tide, using a capacious maw with sharp canines at the front.  My uncle and I used to fish these in the Mallacoota lakes with live mullet, but they’ll rise to lures as well, especially soft plastics.  They hit like a freight train but the fight isn’t the longest.  Delicious firm flesh; great breaded and pan fried.

Old wife, Enoplosus armatus.  More familiar to snorkelers and scuba divers than fisher folk, old wives are common and striking schooling fish on inshore rocky reefs in southern Australia.  They’re quite spiky and would be terrible to eat (bony with little flesh).  They’re in a monotypic family, which is to say that they are the only species in Enoplosidae; their closest relatives are among the butterfly fishes or Chaetodontidae. 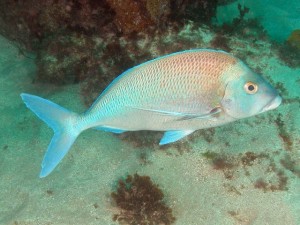 Blue morwong, Nemadactylus douglasi. Morwongs are well represented in antipodean waters but the family (Cheilodactylidae) is not present  in the US except for a species  or two in Hawaii.  They’re commonly caught on bottom-fishing charters on offshore rocky reefs and are very tasty.  Many morwongs undergoe profound changes in appearance as they grow, the younger individuals being starkly coloured reef-associated critters.

Blue groper,  Achoerodus viridus.  Blue gropers aren’t.  Gropers that is.  They’re actually one of the largest wrasses (Labridae), which many reef fish people may surmise from their wrasse-like appearance (triangular pectoral fins used for swimming, lippy sort of “beak” mouth.  A large and beautiful species that was once common on rocky inshore reefs but was too gullible for its own good, falling easy prey to spearfishermen.  It has been subject to severe catch restrictions for many years on parts of the Australian coast; it’s the state fish for New South Wales.  Only adult males are blue; females and juvenile males are a reddish brown colour.

Mado sweep, stripey or footballer, Atypichthys strigatus.  One of two unrelated species called stripey in Australia, the other being Microcanthus strigatus. Mados are in the Scorpididae or sweeps, which are common schooling fish on rocky reefs but are usually dull slatey grey, so mados are somewhat unusual for the family in their handsome chocolate stripes and yellow fins.  Little ones often act as pilot fish for larger species, but larger fish hold their own in the rough and tumble of deep reefs; they are tasty in their own right and scrappy little fighters on light tackle.  An ideal kids first fish!

So there you have it, a soupçon of southern Australian coastal fishes.  There’s tons more of course; Australia has a highly endemic fish fauna so many species are not found anywhere else.  And with that, I am off to get some Platycephalus fuscus for dinner…

2 Replies to “Some Aussie fish I have known”