I’ve just wrapped up another whirlwind week in the Gulf of Mexico – a 3-day sampling trip spanning 250 miles of coastline, followed by a weekend workshop for undergrads covering the “Bioinformatics of Biodiversity”

As far as sampling, I got what I needed but it wasn’t pleasant.  I re-sampled all our existing sites from Dauphin Island, AL to Bald Island State Park south of Tallahasse. Afternoon on the first day was enjoyable, but the sun surprised me and I got the burn to prove it.  The second day was gloomy and the third day was an absolute downpour with thunderstorms and tornado watches.  Science doesn’t stop for the weather, so I had to plod on.

A year later, there are STILL cleaning crews out on the beaches – Gulf Shores National Seashore (a beautiful preserve of ivory sand) got hit pretty hard last summer, and every storm still washes more oil ashore.  A ranger at Gulf Shores State Park in Alabama noted, “I moved here from Galveston to get away from oil on beaches, and then this happened”.

Our undergraduate workshop was a great success – we had 11 bright students who were eager to learn and always had insightful questions.   We enthralled the group with microscope taxonomy and next-generation sequencing technology in the context of our Gulf of Mexico RAPID project – all the methods we explained and demonstrated were tools we use every day in the lab, and it opened their eyes to the reality of scientific research.

But the most important component of this workshop was socializing, perhaps even more so than the science itself.  The divide between undergrads and professors—a subtle, easily ignored physical divide on campus—never really struck me until this weekend.  Many undergrads see their professors as old, boring and stuffy; they know nothing about their love of good beer and heroic liver capacities (a.k.a. god-like capacities for marine scientists).   We took the legally-aged undergrads to a bar and proved how cool we actually are…relaxing together with a beer really opened the communication channels and fostered a great dialogue.  And boy, did they have so many questions – about our research, applying to grad school, and possible career options.  As an undergrad, I would have KILLED to have dinner with a distinguished researcher and ask them how to tailor my grad school applications.  Most of what I know about how science works has come from real-world, informal conversations with other researchers—the earlier that undergrads realize this, the sooner the benefit for their personal and career development.  Talking to undergrads was also pretty uplifting for me as a postdoc—their enthusiasm was catchy, and it made me mentally resolve to reach out more towards this demographic in the future. 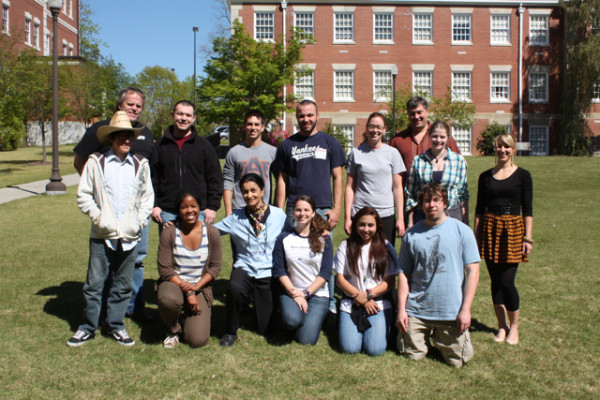 By the end of the workshop the undergrads were threatening us with punitive vodka shots if we kept talking about maximum likelihood and gamma distributions on a sunny Saturday afternoon (hey, at least we fed them pizza first)…