Just a few months ago in his State of the Union address, President Obama called for more science education. As always, this is desperately needed to counteract anti-scientific political antics. From a Wired pieces called “7 Science-Education Battlegrounds of 2011”:

Less than four months into 2011, lawmakers in seven states have proposed nine pieces of legislation designed to undermine public science education.It’s a record-breaking pace on schedule to eclipse 11 similar bills proposed in 2009.

“There’s been a rising tide of not just evolution denial, but science denial all the way around,” Robert Luhn of the National Center for Science Education wrote in an e-mail to Wired.com. “Creationists and their kin are attacking global-warming science, plate tectonics, the Big Bang and on and on.”

So it seems very peculiar and short-sighted for the National Science Foundation to cancel a successful program that brought science and engineering graduate students into K-12 classrooms. From Save GK12:

According to an independent assessment, GK-12 met and exceeded every one of its goals. GK-12 graduate students became better teachers and communicators, GK-12 teachers became more comfortable and confident teaching science content, and the classroom students became more excited about science.

This was certainly my experience as a GK-12 fellow last school year (2009-2010). Being in a 9th grade Earth Science classroom was extremely challenging and rewarding. The teacher and I were able to bring diverse students into a local canyon to learn key Earth Science concepts, scientific observation, and California natural history. Since most students had little experience with non-urban environments, this increased their curiosity about nature (and decreased their fear – they really thought they would be eaten by coyotes!), as well as improving their performance in the classroom. 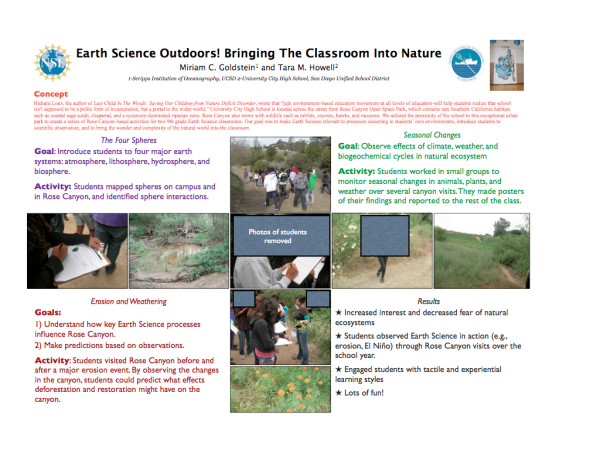 According to this Science article, NSF’s reasons for cancelling the GK-12 program was that graduate students enrolled in the program do not become better researchers than their peers. (They are neither better nor worse.) GK-12 fellows do become better teachers, communicators, and advocates for science education – I find it peculiar that NSF deems this irrelevant, as that was the entire purpose of the program. All the rest of graduate school is dedicated to becoming a better researcher!

In their template letter for graduate students, the Save GK12 website points out:

President Barack Obama has called upon professional scientists and engineers to participate in enhancing the STEM education of K-12 students. In his address to The National Academy of Science on April 27, 2009, he said, “I want to persuade you [STEM professionals] to spend time in the classroom, talking and showing young people what it is that your work can mean, and what it means to you.” Among all federal STEM education programs, there is a single program that does exactly what the President has suggested — the GK-12 Fellows program.

If you value science education in the classroom, and think that it is valuable for emerging scientist to hone their teaching and communication skills, I encourage you to write a letter of support for GK-12. I have written my representatives – on paper! – and sincerely hope that even in these tough financial times, we can find the funding to continue this wonderful and successful program.

2 Replies to “Why is a successful NSF science education program being cancelled?”