Driving through more remote parts of the Australian countryside when I was a young tacker, my Dad would often stop the old Mazda Capella so that we kids could investigate some reptilian thing warming itself on the black road surface; it was usually a fat shingleback or bombastic blue tongue, but sometimes a lovely red-bellied black snake or scary tiger snake. “What are they doing Dad?” I would ask, “Why sit on the road where you’ll get squished?” and he would tell me (with typical parental finality) that it was because they were cold-blooded. In my youthful brain, that meant that they were permanently chilled by an internal source of perpetual coldness, like they had an ice cube for a heart. It wasn’t until much later that I came to understand that it didn’t mean that they were necessarily cold, just that they operated at ambient temperatures, without the ability to warm themselves physiologically. That road-hugging behaviour I had seen as a kid and so many times since was what scientists call thermotaxis: orienting the body towards (or away from) a source of heat. After a morning’s warming themselves on the blacktop, the lizards or snakes would be ready to tackle the bush, chasing down marsupial mice or whatever other hapless victim they might find, their metabolisms charged by the solar equivalent of a doppio espresso.

That early notion of cold-bloodedness was reinforced at school, where we all learned the bright distinction between endotherms or homeotherms (the warm-blooded) and ectotherms or poikilotherms (the cold-blooded). The warm-blooded included mammals and birds, while the cold-blooded was everything else. Roger that. Add that to the knowledge bank, and let’s move on. But, just like kids first learning that pi equals 22/7, then 3.14, then some irrational expression only remembered by freaks in the Guiness Book (and some of the kids in math club), over time you come to learn that the distinction between cold- and warm-blooded is not so simple. Somewhere along the line, college zoology perhaps, I heard about some shark species that could operate at a few degrees above the ambient temperature, maybe giving them a predatory advantage over their sluggishly chilly prey. Then debates about whether dinosaurs might have been warm blooded, and so on. In this way, as in so many things, oversimplification for the benefit of children gives way to a more complete and nuanced understanding of the true complexity of things, even for something as seemingly simple as the distinction between those animals that warm themselves and those that don’t.

The cold dark eye of the mako hides a warm brain

It turns out that lamnid sharks are not the only creatures in the pelagic realm that can operate above the ambient temperature. It seems that many pelagic species express some form of control over their internal temperature and that that control is expressed in a surprising diversity of forms and functions.

Lamnid sharks, which includes the mako, great white and porbeagle, warm their brains and eyes using modified muscles surrounding the eyeballs. This baseball sized chunk of flesh is darker than their normal muscle because it contains more oxygen carrying pigment (myoglobin) and operates at a higher metabolic rate, warming the adjacent eye and brain tissues. Similar red muscle forms tracts along the body, slightly raising the muscle tissue temperature throughout the body. They also warm their internal organs through a dense network of blood vessels called a rete (pronounced like “ree-tee”) that sits above the liver. These retes contain both veins and arteries in close juxtaposition but flowing in opposite directions, the net effect of which is to retain on one side of the rete warmth produced by the red muscles on the other side and by the increased metabolism that comes from digestion of food in the gut. The rete is a bit like the heat exchanger on the back of a fridge and is an important feature of anatomy in several warm-blooded fishes.

Tunas operate a little warmer than the surrounding water by heating their brains and muscles. Some species also warm their organs; it’s probably most of them, but proving it is harder than the other two types of body warming. Their relatives the billfishes are like mako sharks in that they use eye muscles to warm the brain, but they are actually even more specialized. There is a part of the eye muscle in billfishes, imaginatively called “fish cranial heater tissue”, that is modified for the sole purpose of warming the head. This is different from the mako, where the eye muscles produce warmth but also operate the eyes. 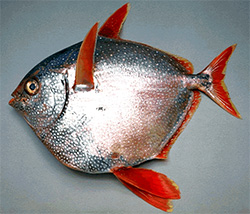 Until recently, discussions about warm-bloodedness in fish would have ended there – lamnid sharks, tunas and billfishes – but some recent work is showing that other pelagic species also warm themselves. The opah (Lampris guttata, one of my all-time favourite fishes!) uses eye muscles to heat the head and a rete to keep the heat there, but it does not heat its body muscles. Thresher sharks, which are requiem or carcharhinid sharks and not lamnids, also heat their bodies. Finally, there are several muscle, organ and head heating adaptations in mobulid rays, which includes the devil rays (Mobula spp., as in the Tampa Bay baseball team) and the manta rays (Manta spp.). Mobulids make heavy use of retes and, depending on species, can have them at the base of the wings (to keep heat in the body core), above the visceral organs, and on the floor of the skull, like a hot water bottle for the brain. 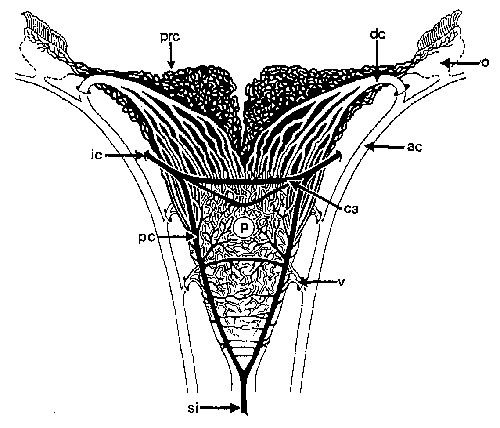 A diagram of the rete the lies under the brain of Mobula tarapacana with veins (white) and arteries (black). From Alexander (1996)

One important pattern that emerges from these observations is that body-warming is not a taxonomic thing: it has evolved several times in several different lineages, at least twice for sharks and once each for rays, tuna/billfish and opah.  Rather, body warming is an ecological thing because it occurs in many species that are not related but all share pelagic migratory habits. Doubtless a closer look at other pelagic species will show that it has evolved in quite a few other species of the open ocean too. All of which begs the perennial question: why? Why must a resident of the open ocean warm its muscles, eyes, brains or guts, given that they live in an environment seemingly tailor made for heat loss (water is an excellent heat conductor after all)? Whatever the answer, it must be a selective pressure commonly experienced in the oceans to have forced so many groups to evolve independently the ability to warm themselves. 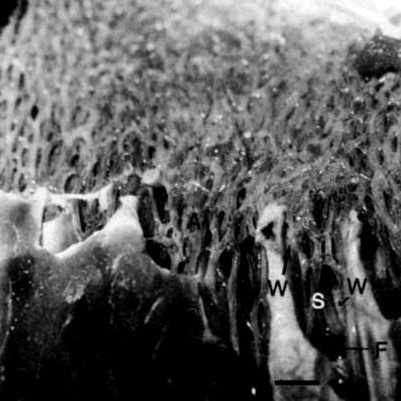 A photo of the wing rete in Mobula tarapacana, from Alexander (1995)

The answer to that question is not yet nailed down, but Dickson and Graham (2004) explore two likely explanations in detail. The first is the idea that warming the brain/body allows these species to use more of the available ocean. Normally, a cold-blooded critter would be adapted and restricted to either the surface layers where the sun warms the water, or to the cold dark depths. By taking control of their own temperature, however, animals are liberated from the tyranny of environmental temperatures and can cross the sharp (but invisible) thermal barrier between the two habitats, which oceanographers call the thermocline. Typically this would mean warming up in the shallows and then making daily sojourns to depths to feed on sluggish, truly cold-blooded prey. The other possible explanation is that warming the body improves swimming performance, which leads to advantages over your prey if you’re a predator, or vice versa. Under that explanation, the repeated evolution of body-warming in fish would be explained as a sort of evolutionary arms race between predators and prey. Personally I favour the first explanation, the idea that body warming allows you to use more of the available ocean for hunting. It makes a lot of physiological and evolutionary sense and it explains the presence of warming adaptations in mobulid rays; Mobula and Manta are largely filter feeders.  It’s not like they need to operate at wickedly high temperatures in order to keep up with their hapless plankton victims, but it would definitely be helpful for them to be able to track their prey during the famous daily vertical migration of plankton, which sees them concentrated at depth during the day and at the surface at night.

Of course, it’s possible that the true explanation for warm-bodied pelagics includes a bit of both reasons, and maybe some others I haven’t presented here or that haven’t been thought of yet, but the idea of warm blooded fish iscertainly intriguing and speaks to the evolution of complex and diverse physiology among pelagic animals. Maybe it’s time to revise the oversimplified paradigm of cold-blooded versus warm-blooded that most folks carry with them from their school days into adulthood. The truth seems fantastically more varied and intriguing. It’s enough to warm the cockles of a marine biologist’s heart.

5 Replies to “A bunch of hot heads”