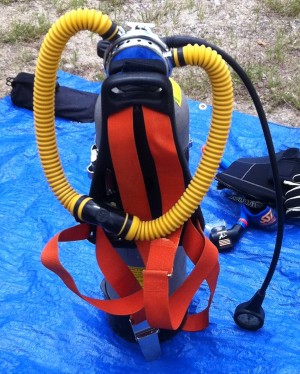 Last Saturday, I spend the day diving at Fantasy Lake.  I enjoyed two dives at 40-50 feet in the old quarry exploring a rock crusher, a metrobus, an airplane, and a glassbottom boat.  I also spent the second dive observing several green sunfish and striped bass.

The real treat was diving with a vintage early 1960’s Aqualung.  If you are unfamiliar, Aqualung was tied to Jacques Cousteau.  Actually it is a little more difficult than that.

in 1950, Rene Bussoz, owner of ‘Rene-Sports’ in Los Angeles, California,  became the exclusive U.S. distributor of the now famous “Aqua-Lung” diving regulator patented in 1945 by Jacques Yves Cousteau and Emile Gagnan (with all international patent rights assigned to the ‘Aire Liquide’ company, in France). Bussoz formed a new company called ” U.S. Divers Corporation” to administer the exclusive U.S.license – which had six year term.  The 1950 ‘Aqua-Lung’ regulator sold by U.S. Divers Corp. was the latest development of the original, French ‘CG45’ model of the Cousteau-Gagnan regulator and was assembled in Canada from French and Canadian-made parts. The regulator was a handsome unit, combining a satin chrome bottom case with a bright chrome top case, and sporting a black and chrome tag with the name “AQUA LUNG” prominently displayed.

The original Aqualungs were much different than today’s scuba equipment.  First, the regulator (the part you

breath through) is double hosed. One hose delivers air from the tank to diver and the other moves your exhalation to a vent behind your head.  Modern regulators are single hosed, i.e. just bring air to the diver, and the exhalation is vented right from the regulator. Second, there is only one stage, i.e. the part that lowers the pressure of the highly compressed air in the tank so that you can breathe it. Modern systems have first, occurring at the tank, and second stages, at the regulator. Third and most interesting for the diver is you dive without a buoyancy compensation device (BCD).  The BCD is an inflatable vest attached to the airtank that can be in/defalted to adjust buoyancy.  With the old Aqualungs you took extra care to weight properly and buoyancy is controlled by breathing and controlling the air volume in the lungs.

I spent some considerably time trying to master the last one. Although to some extent, myself included, experienced divers with modern equipment still adjust depth by controlling lung air volume.  Usually this is just 10 feet or so.  I found mastering this over a range of 30 feet a bit difficult.  However, I found the minimal equipment, i.e. the lack of BC, and the venting of exhalation behind my head to feel freer underwater and more focused on the moment.

Feels like I will spending time in the very near future at Vintage Doublehose searching out my vintage rig..

3 Replies to “Diving With A Vintage Aqualung”