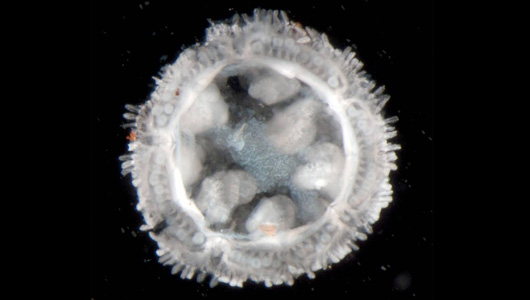 Some of us never grow up.  In fact I am writing this now in my Aquaman pajamas while laying on Return of the Jedi bedsheets*. Unlike my childlike tendencies, for other species sometimes delayed growth can be advantageous in nature.  Take Xyloplax. New work suggests that its development may be stunted as an adaptation to its favored unique habitat.  And no I am not talking about a college fraternity or high school locker room. 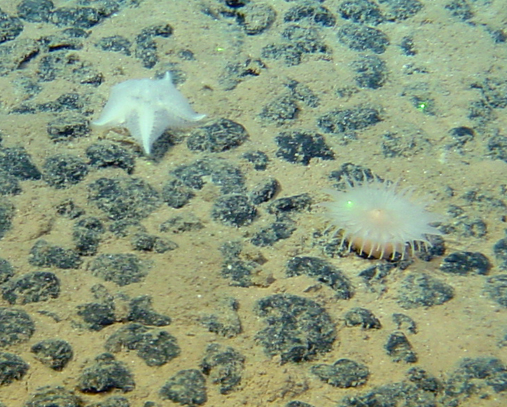 Are you my cousin? An anemone and Pteraster seastar play on the seafloor. Species of the Pterasteridae like that fat bastard above may be related to the armless but sexually active Xyloplax. Image from IFREMER

But perhaps we shouldn’t get carried away and start handing out taxonomic classes like Republicans handing out tax breaks to the rich.  Many, including the good ol’ Dr. Mah have hypothesize ﻿Xyloplax is an actual Asteroid with arrested development so that sexually mature individuals occur in an otherwise juvenile body (i.e. progenesis).  A new scientific paper using DNA and developmental data from adult and embryonic Xyloplax supports this idea.  Xyloplax appears most closely related to the chunky little, mucus producing, bastards of the family Pterasteridae.

What would the advantage be of being an armless juvenile with functioning gonads? One, you get more interesting Friday nights. Second, Xyloplax inhabits pieces of wood that fall to the deep seafloor.  Being small and disc-like allows Xlyoplax to fit into small spaces in a decaying piece of wood to consume bacteria.

So the next time you tell someone to grow up, consider they may be perfectly adapted to thier niche on this planet.

*Part of this statement may not be true.

2 Replies to “Some Echinoderms Will Never Grow Up”