Jenny Schmidt from U. Illinois and her co-authors have uncovered a fascinating nugget of biology of the whale shark in a recent (and Open Access – w00t!) paper in Endangered Species Research.  In it, they continue the analysis of embryos collected from a heavily pregnant female first reported by Joung et al. (1996) in a paper that I have to give props to for the most creative (I dare say only!) use of the phrase “megamamma supreme” in the title (how they got that past the editors I shall never know).  That first paper established that whale sharks do indeed give birth to live offspring, as opposed to laying eggs, because there was some debate on that point.  This more recent piece addresses the question of paternity and comes up with a surprising conclusion.

A pregnant female whale shark is a juicy mental picture indeed.  I mean, if the whale shark is the largest of all fishes, how gargantuan must be a big ol’ mama, turgid with a teeming horde of spotty little kiddies?  And what must it be like when that next generation finally bursts forth into the world, all 25 dozen of them?  Well, Dr. Schmidt has some slightly disappointing news: they probably don’t erupt quite so dramatically.  That’s because the offspring they studied covered the full gamut of developmental stages from barely-formed, to ready-to-pop little mini-adults. That means the female likely gives birth over an extended period, releasing a few here and few there as each embryo reaches maturity.  This result implies that pregnancy might be a very prolonged affair in whale sharks, and it also raises the possibility of multiple paternity: the idea that different embryos might come from different matings with different males. 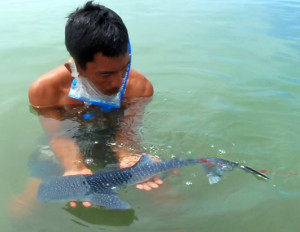 This baby whale shark is one of few ever observed; it was found in the Philippines in 2009

That’s where their other discovery comes in.  Using DNA-marker techniques, Dr. Schmidt and colleagues showed that all the embryos they studied had the same genetic father.  How can it be that all embryos have the same dad, but are at all sorts of different stages of development?  Do whale sharks form monogamous pairs that roam the oceans together, pairing regularly?  Probably not.  Rather, it seems likely that female whale sharks mate once then store the sperm internally and use it to fertilise a long sequence of eggs over time, producing a staggered series of offspring.  It’s the reproductive equivalent of sipping, not chugging and is probably an adaptation that serves to maximise the benefit of rare mating encounters and to avoid putting all their, um, “eggs” into one birth basket.

I greatly enjoyed their paper.  It’s an elegant application of genetics and embryology to infer reproductive biology in the absence of direct observation (neither mating nor pupping has ever been seen) and constitutes another great piece of the enigmatic puzzle that is the biology of the world’s largest fish.  If you’re into sharks, I highly recommend it.