In preparation for a scientific cruise this summer, I’ve been testing my zooplankton collection and incubation equipment. So I’ve gotten to go out in a small boat off Scripps to tow my net around and collect plankton. The zooplankton has, of course, been extraordinarily adorable and charming, but the megafauna has been awesome too.

A somewhat incompetent osprey has been hanging out on the Scripps pier. He or she doesn’t really seem to know what to do to be a proper osprey, and spends a lot of time watching surfers.

Last week, we hung out for a time with a friendly mola mola (ocean sunfish) about the size of a truck tire. Wudda lil guy! 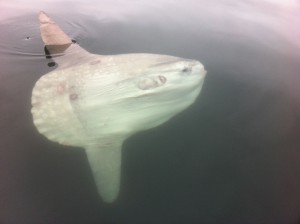 And yesterday there were a couple blue whales just a short way offshore, where the underwater La Jolla canyon cuts through the shelf. They looked like they were doing short dives to feed on plankton in the shallower parts of the canyon. We could hear the WUFF of their enormous breaths all morning as we towed plankton nets. This is a crappy video that I took when I thought I was taking a photo, but it gives the idea of their hugeness.

We also saw Risso’s dolphins but unfortunately I didn’t get a photo. They are big white-and-grey dolphins with a huge pointed dorsal fin.

Mandatory conservation note: Isn’t it cool that we got our act together to conserve the biggest animal on earth??? There are ocean-going scientists from the baby boomer generation who have never seen a blue whale because they were hunted so close to extinction, and now we are seeing them just offshore of a major city. We are NEVER SORRY about conservation in the long run. Not killing stuff: it works!