How many of you see a panda and automatically think of conservation and the World Wildlife Fund?  The well-known panda logo was designed by the famous conservationist Sir Peter Scott. one of the founding members of WWF.  The idea originated from a panda named Chi Chi transferred into the London Zoo in the same year of inception as WWF.  This panda, the only one outside of the Asia at the time, represented an easily recognizable icon. One who itself was endangered.  Of course, the image has another key feature—it is equally recognizable and impactful in black and white printing.

But this 50-year old panda icon represents a land based conservation mission. Even in an expanded view the panda only represents vertebrates which would incorporate only the most historically charismatic of ocean species, e.g. turtles, whales, dolphins, seals, sea lions, and otter.  I find this extremely troubling giving 75% of the earth is ocean and 90% of that is ocean below one kilometer.  And perhaps this is even more unsettling if we consider 90% of known species are invertebrates and 92% of species inhabit the ocean. Invertebrates also incorporate a greater span of ecological roles and body sizes, are fundamental in nutrient cycling, and form the basis of many food chains and habitats for other animals.  Marine invertebrates are no less than key to our planet and vital for our own survival. Yet, marine invertebrates except corals do not attract public or political attention and thus ultimately protection.  Invertebrates are only protected by default when we conserve other species or set ocean aside.

What is the emblematic species of the ocean that will serve to energize and unite us?

This species needs to represent a vast array of species, suffer from the same conservation threats as they do, thus protecting other species when it is protected, serve as indicator about the health of marine systems, and of course capture the public’s attention.

Guerra et al. believe that species is the Giant Squid, Architeuthis, and I agree.

One doesn’t need to search far to grasp that the Giant Squid attracts public attention. The pages of this blog are riddled with examples. In the last month alone, according to Google News, Giant Squid occurred 128 times in the news.  In that same period of time 940,000 websites also mentioned Giant Squid.  Thirty specimens lie for public viewing in museums. Amazon returns close to 1,000 books, toys, apparel, and other products featuring the Giant Squid. On the web the Giant Squid is a cult sensation found on stickers and t-shirts. I could flood this webpage with data to demonstrate the Giant Squid is already in the public’s attention.

Architeuthis is an indicator of ocean climate change

Giant Squid like most other cephalopods possess statoliths, a calcium carbonate structures contained by the squid’s equilibrium receptors (think your inner ear). Much like many other species, the Giant Squid would not fair well in an acidic ocean. An acidic ocean would dissolve the statoliths impairing its movement and equilibrium.  Moreover, the Giant Squid’s blood is poor at oxygen transfer making them particularly vulnerable to lowered oxygen (anoxia & hypoxia), warming, and acidification.  Heat speeds an animal’s metabolism.  Because of their energy requirements and oxygen needs, giant squid must stick to cooler waters.  Indeed, it is hypothesized their global distribution in the oceans is limited by warm temperature barriers.  Guerra et al. also demonstrate that strandings of Giant Squid in Newfoundland were always associated with rises in ocean bottom temperature. 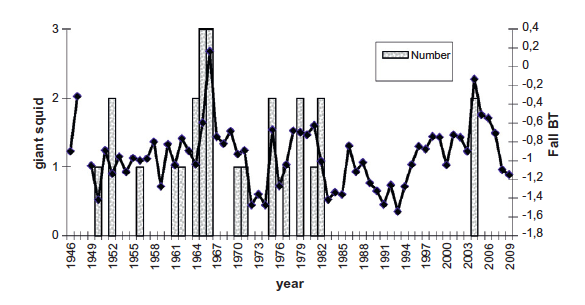 Architeuthis is an indicator of overfishing

Guerra et al. demonstrate “that there has been a clear increase in the frequency of captures in fishing trawls, since the expansion of deep-sea trawler fisheries.” Indeed, “The world records of Architeuthis due to commercial fishing represent about 29% of the total records.” But this likely represents an underestimate as bycatch is often underreported.

Architeuthis is an indicator of pollutants

Giant Squid specimens from more polluted water have higher concentrations of zinc, mercury, silver, and copper. These concentrations are also higher in the digestive glands and higher than in other squids.  This suggests that as a long-lived, top predator, Giant Squids are bioaccumulating toxins in their systems.

Two major mass strandings of Giant Squids in 2001 and 2003 were tied geophysical surveys in the area, using 10 compressed air guns to produce low frequency sound waves.  The internal organs of the Giant Squids were a pulverized.  “Internal examinations showed that two of the squids suffered extensive damage to internal muscle fibres, their stomachs were ripped open and their digestive tracts were mangled. One probably had died from its injuries. Some of the squids had also suffered severe damage to their statocysts that would have effectively disorientated them”

The Giant Squid is cosmopolitan in the world’s ocean but as Guerra et al. show it appears mostly in areas with submarine canyons that cut across the continental shelf. These canyons provide areas of high productivity including fishing grounds we humans often exploit.  Because submarine canyons are often close to shore, exploited, and rich with biodiversity and biomass (as I’ve seen in my own research), canyons and giant squid are both vulnerable.  Submarine canyons also often targeted as National Marine Sanctuaries, e.g. Monterey Canyon off California.  As Guerra et al. state “Architeuthis serves to raise social awareness for the conservation of a diverse group of organisms that inhabits these canyons.” 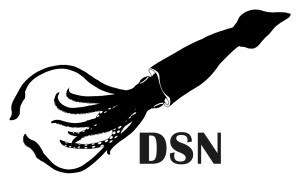 In short, Architeuthis meets the criteria of an emblematic species.  One that will hopefully unite us all on this June 8th, World Ocean Day, to strive for something greater, to finally alter our course, shed our history, and forge a new relationship with the ocean.

Share the post "From the Editor’s Desk: The Giant Squid Can Be A Panda For The Ocean"

6 Replies to “From the Editor’s Desk: The Giant Squid Can Be A Panda For The Ocean”