To get you ready for the awesomesauce that is KRAKEN Day(!!), it is only appropriate to open with Dr. M’s Epic giant squid post from earlier this year. Enjoy :) 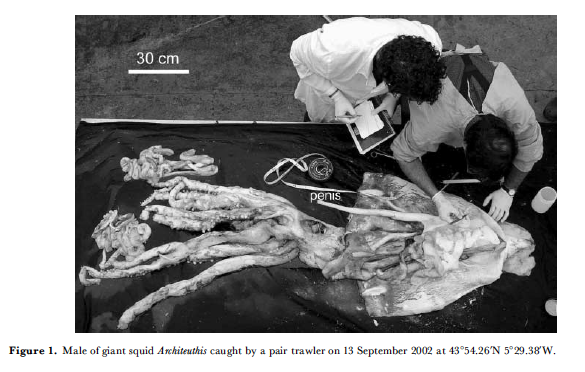 In 1857 Japetus Steenstrup, a Danish biologist scientifically named several squids and octopods in the shortly titled Hectoctyldannelsen hos Octopodslaegterne Argonauta og Tremoctopus, oplyst ved Iagttagelse af lignende Dannelser hos Blacksprutterne i Almindelighed. Among those species Steenstrup named was the Giant Squid or Architeuthis dux. The scientific name comes from the Latin archi- or Greek arkhi- meaning chief or most important, the Greek word teuthis for squid; and the Latin dux meaning leader. So literally the name Architeuthis dux translates to “most important squid leader”. That is scientifically an awesome name.

Since 1857, everyone wanted to name a new giant squid species. And who wouldn’t because they are awesome? Thus to date 20 species of giant squid are named. But quite frankly not everyone buys into this gaggle of giant squid. Nesis in the 1980’s suggested that only three valid species exist, Architeuthis dux in the North Atlantic Ocean, Architeuthis martensi in the North Pacific, and Arciteuthis sanctipauli in the Southern Ocean. Of course, no one knows for sure. The key would be in the genes and giant squid expert Steve O’Shea commented on a thread that his lab’s genetic research indicated that “in short, no [genetic] difference between any of the regions (no evidence for recognizing more than one species).” So one Giant Squid distributed across the entire globe equals awesome.

The anatomy of Architeuthis is nothing short of awesome. The key features of the Giant Squid, besides its size, are small ovoid fins at the end of body, i.e. mantle, eight very long arms, two exceptionally long tentacles, and a distinctive tentacular club structure. A tentacular club is the end portion of the tentacle that is expanded, usually covered in suckers, and used for grasping. The tentacles have 4 rows of suckers and divided into three distinct regions. The arms are covered in 2 series of suckers. With regard to the suckers, they are shaped like a suction cup on a stalk. The perimeter of the sucker is rimmed with a sharply toothed ring of chitin. These can cause quite a nasty cut and several sperm whales bear the marks of the Giant Squid. Tentacular clubs with chitin ringed suckers is a scientific recipe for awesome.

Like other squids, Giant Squids possess a siphon, a muscular funnel that extends off the mantle. A squid can propel itself by projecting water through this siphon, which is extremely flexible and can be aimed to control movement. Water is expelled from inside the mantle through the siphon by contraction of the muscular mantle. This siphon also has a valve on it to prevent water from back flowing between squirts. With a jet-like siphon that can be aimed, Giant Squids are awesome.

Both eyes of the Giant Squid have adjustable lenses and a dark iris but lack a cornea. The eyes are enormous, the size of dinner plates, and are the largest eyes in the entire animal kingdom. Blue whales can suck it with their tiny and most definitely less awesome eyes.

Look inside the Giant Squid and you will find mainly organs dedicated to the Giant Squid’s two favorite activities, eating and loving. The digestive system begins with formidable chitinous beak. The half-foot long beak is surrounded by a muscular mass that can both protrude and rotate the beak. The upper beak with downward point possesses a perfect cutting edge with a lower beak to tear prey apart. The esophagus moves chunks of prey onward toward the stomach. A set of massive salivary glands and a single digestive gland produce enough enzymes to digest a subway car. Yeah, that’s awesome. And to demonstrate the Giant Squid’s dedication to eating, I deliver exhibit A: the esophagus of this beast passes directly through the middle of its brain.

What do Giant Squid eat? Misbehaved children, subway cars, fish, and other squids. Juvenile squid appear to take smaller less feisty prey low on the food chain while adults feed larger prey at the top food chain. Gut contents have included: 10 species of fish, 1 clam, some tunicates, 3 types of crustacean, and 5 species of squid. Genetic screening of gut contents from Architeuthis yielded of evidence of both the fish blue grenadier and other Giant Squid. That’s right, cannibalism is also known among giant squid.

Some debate abounds about the kind of predator Architeuthis is. Some scientists believe evidence supports the idea that Giant Squid sit in the dark depths hovering until unsuspecting prey draw close to the tentacular clubs which quickly draw it to the mouth. On this thread, Steve O’Shea suggest that how ammonium concentrates in certain tissues, which would make these tissues more buoyant, indicating the squid faces 45˚ downward letting tentacles hang down to catch unsuspecting prey. On the other hand, Japanese scientists caught photos (above) of a Giant Squid actively attacking a baited hook. More evidence is needed, but clearly if you are prey of Giant Squid you’re humped either way. And that is a win in the awesome contest.

Many of you will never have a late night sexual encounter with the world’s largest invertebrate and that’s probably for the best. The part of the mantle cavity that is not filled up with digestive gland and stomach is gonad. Females can produce up to 11 pounds and 1,000,000 eggs at time. The males…well…let’s just say they scare other invertebrates with their big winkies. The meter long male organ can hydraulically implant spermatophores into females. That’s right, hydraulically implanted. Male Giant Squid appear not to be too discerning with his arms as both males and females have been found embedded with spermatophores. You can think of the spermatophores as parasitic sperm packets. The female likely releases a giant egg mass through her funnel that she then cradles with her arms. Spermatophores embedded in the female’s arms likely release the stored sperm directly onto the egg mass.

Given the incidence of cannibalism, sexual encounters are likely to come away with partners fairly battered. Given the distribution and concentration of sexually mature individuals collected to date, Giant Squid appear to come together at particular breeding grounds. Just make sure you are no where near when this awesomeness happens.

Really big. Early accounts of the size of the great beast regaled stories of 60 ft long specimens. But it is unlikely these were accurate measurements. The longest scientifically measured specimen had a total length with tentacles of 42 feet and mantle length of 7.4 feet. Weight of a mature individual is somewhere between 400-500 pounds. Interestingly, Giant Squid display sexual dimorphism, i.e. the sexes are anatomically different, with the females being much larger than the males. So, because Giant Squid can reach sizes approximately the length of school bus… they reach the height of awesome. 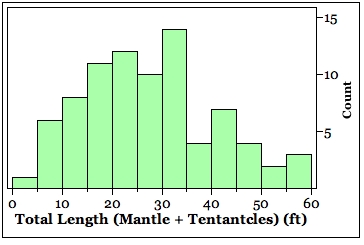 The age of Giant Squid is not known with certainty. The layers of statoliths, bony masses that reside within balance organs, are secreted daily in shallow water squids. If the same occurs in Giant Squid, a big unknown, then full adult size would be reached in just three years. Consider that humans take 5 times as long to reach a third of Giant Squid’s size, and you can appreciate that their growth rates would be a record holder in the animal kingdom. So what did you do this week? Because a Giant Squid just grew four pounds! You are not as awesome as Giant Squid. Science says so.

It is not likely you will catch a live Giant Squid unless you are Japanese scientist. No you will have to relegate yourself to damaged specimens that drift ashore, a freshly caught specimen caught as bycatch by fishermen, or a beak from the stomach of sperm whale – the Giant Squid’s only known predator. Given our knowledge of sperm whale foraging behavior and fishing net captures, Giant Squid likely dwell at depths between 1000-3000 feet.