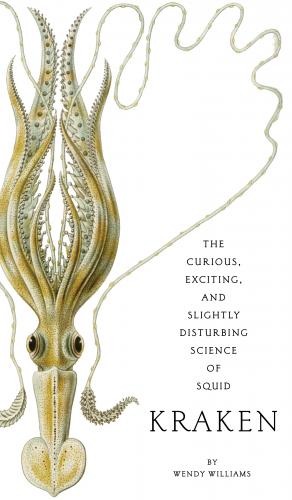 Kraken: The Curious, Exciting, and Slightly Disturbing Science of Squid

When you look at the huge diversity of life on this planet, there are wondrous sites to behold. There are trees that grow until they seemingly touch the sky, and whale species the size of houses. And yet, most animals fall within the same basic body structure: head, body, arms and legs.

One of the animals that don’t fit into that general body plan is one that has captured the imagination of authors and movie producers for hundreds of years – squid, specifically the giant squid. They are the stuff of Lovecraftian nightmares, with giant volleyball eyes, suckers that grasp you tight, and a beak instead of a mouth.

But, author Wendy Williams in her new book “Kraken” decided to dispel those fears as best she could. And she admits, while all cephalopods are rather bizarre looking; they are amazing creatures that have helped out humans in a multitude of ways from cell biology to neurology and optometry.

In fact, much of our understanding on neurons and neurology is all thanks to cephalopods. The key is that human axons (the long part of a neuron) are too small to see without a powerful microscope, much less dissect out and experiment with. But the squid (specifically of the genus Loligo) has an axon that is visible to the naked eye, and can survive for hours after dissection. We owe so much to cephalopods that Williams quotes one scientist saying that the squid deserves a Nobel Prize.

The book is like a love note to cephalopods everywhere, especially to squid, but also octopuses and cuttlefish. But, you are probably wondering, why are they interesting? Why would somebody write a book all about them?

First off, they can be found in almost every ocean across the world, and are extremely successful. They can range in size from being able to fit on a fingernail, to 46-foot long monsters with eyes the size of dinner plates. They are fast (up to 25 milers per hour), extremely maneuverable, crafty and masters of deception.

Most species can change the color of their skin, whether it be like the Humboldt squid which flashes red, a Pacific giant octopus that can blend in to most ocean surroundings, or a cuttlefish that can both startle and amaze with its amazingly vibrant color displays. These abilities are so advanced that the United States military has funded research exploring how to make the camouflage on soldiers more efficient.

Williams also makes the case that cephalopods are highly intelligent, but maybe not the same way that we define intelligence (which is in a very human-centric way).

James Woods, the chief educator at the Southern California’s Aquarium of the Pacific, has worked with cephalopods of all kinds for many years, and says that there is a type of intelligence present. But, in order to view it, we will need to change our point of view.

“Let’s say you have two people and one of them is really good at math, and the other is an amazing artist,” says Woods. “Which one is more intelligent? And does your answer depend on whether you’re an art teacher or a math teacher?”

Williams also notes that we have more in common with our cephalopod cousins than people think, it all depends on how you look at it. We possess similar eye structures (known as a camera eye), with the squid lacking the human’s infamous “blind-spot” in the center of our vision. So, their eyes are more efficient, aren’t they?

Well, with every advantage comes a disadvantage: they cannot perceive color, only brightness. And isn’t that sad, Williams says, they can produce such wonderful displays of color, but cannot see it themselves.

Williams writes with a sense of compassion for the poor and misunderstood cephalopods, and spends a lot of time detailing the similarities between our two species. And she succeeds in that respect, and makes what could be perceived as dry science interesting.

I’ve been interested in cephalopods for a long time, and have done copious amounts of research on them myself. But, even for someone who knows a lot about octopuses and cuttlefish, there was still a lot to gain from reading Kraken. Cephalopod experts may not find much new in this book, but it is peppered with colorful anecdotes and insights using other animals.

The book touches on a lot of interesting research being done all over the world, and pulls back the curtain on the interesting lives of the quick squid, the solitary octopus and the pensive cuttlefish. If you are at all interested in any of them, you should definitely pick up the book here if you have a chance.

David Manly is a freelance journalist based in Toronto, Canada, who blogs about a wide range of topics that all fall under the umbrella of zoology and ecology. While his expertise lies with reptiles and amphibians, he has a wide array of knowledge and interest in all animal species – from the sponge to the great ape. He blogs at The Definitive Host as well as at The Wonderful World of Animals at LabSpaces.