Mufasa was right.  We’re all intertwined.  Whether we humans like to admit it or not, every action by a living organism on Earth has repercussions.  (And yes, you can lump in viruses and prions because I’m not getting into a philosophical debate about what constitutes ‘living’). 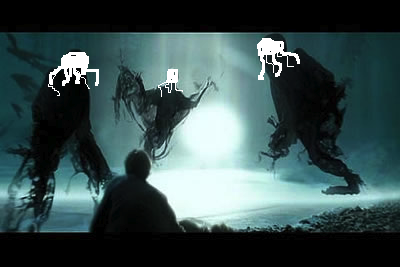 Jellyfish are my favourite animal, but they’re pretty much the dementors of the sea.  Whenever beachgoers spot a swarm, inherent fear of death typically provokes a profuse ourpouring of expletitives and frantic running away.  (My personal reaction involves pointing a short stick of wood at them, although I usually just poke them repeatedly instead of conjuring a patronus).  Marine scientists aren’t quite so scared, but over the last few decades they’ve definitely become concerned.  Diverse human impacts on the environment–overfishing, coastal nutrient input from fertilizer runoff, increased levels of carbon dioxide in the atmosphere, transport of invasive species, marine habitat modification–all appear to be converging, promoting increasingly frequent and severe jellyfish outbreaks. 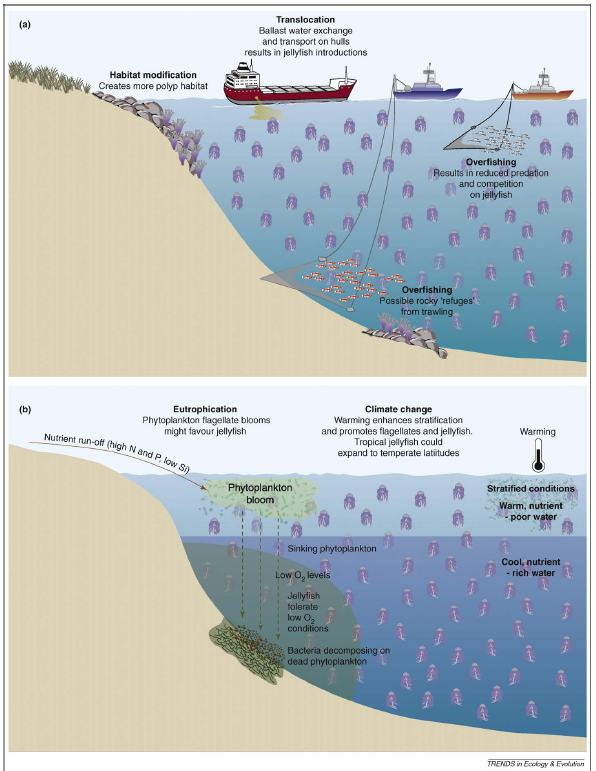 The economic concerns are obvious (lost tourist revenue from beach closures, net damage and contamination of fishing harvests, mortality in fish farms) and the environmental concerns are staggering.  One fear is gelatinous dominance–if jellyfish take over, marine ecosystems might never revert back to their original state once positive feedback loops are established.  This jelly food web could go on replace the ones we all know and love (and eat), where fish currently fill the top predator spot.  That’s why you don’t let the dementors outside Azkaban.  All hell breaks loose.

You can also think of jellyfish as weed species – they will munch on anything and grow pretty quick.  Chopping them in half can give you two jellyfish instead of one.  You can take away their oxygen but they still survive.  Humans cause much stress in many marine environments, there is no doubt about that.  As our society progresses, nature maybe regresses.  Parsons and Lalli (2002) muse that anthropogenic impacts may decimate the oceans to the point where marine food webs start resembling Cambrian ecosystems.

The newest evidence isn’t reassuring.  Not only to jellyfish impact fish stocks, but it now looks like they even affect microbes.  Jellyfish swarms equate to a literal sh*tstorm – which bacteria gobble up like drugs.  Yes, that’s right, jellyfish poo not only enhances microbial communities, but it also leads to significant shifts in community assemblages.  This situation favours groups such as γ-proteobacteria which are typically rare in pelagic food webs.  Jellyfish poo thus causes bacterial communities to burn off more energy via respiration, lowering rates of primary production.  This pretty much screws over higher-level consumers. 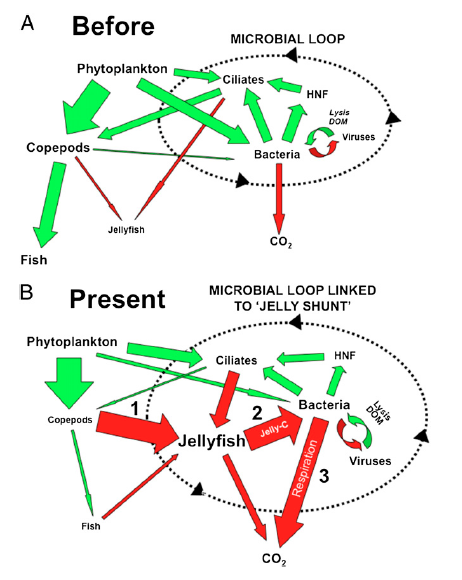 What does this mean in the long run? Well just like climate change skeptics, not everyone might believe the doom and gloom surrounding jellyfish swarms.  To me, the evidence is pretty convincing.  The stack of literature I just read is pretty beefy.  We may be on a runaway train with the end of the track in sight–scientists aren’t sure if or when we’ll reach the jellyfish-tipping point.  But one thing is for certain: jelly swarms aren’t doing anyone any favours.